Air in a Can

This is a follow-up of sorts to my Bullsh*t Product: Boost Oxygen video. If you don’t know what that is and you’re too lazy to click the link (is that click-baiting or just click-dicking?), Boost O2 sells oxygen in a can for various phony baloney health benefits.

I mentioned in the video that Boost wasn’t the only company shilling this sort of thing, and indeed I was right: News stories about Vitality Air have been making the rounds on social media in the last few days. And the stories are on relatively legitimate websites like CNBC, Fortune, and CNN.

Fortunately the stories have primarily been about how clever a business model it is to sell cans of air to dying Chinese people, and have not been about the “health benefits” of sucking down air or O2 from a can.

According to the story in Fortune, Vitality Air got its start selling Ziploc bags of air on eBay for 99 cents as a novelty. 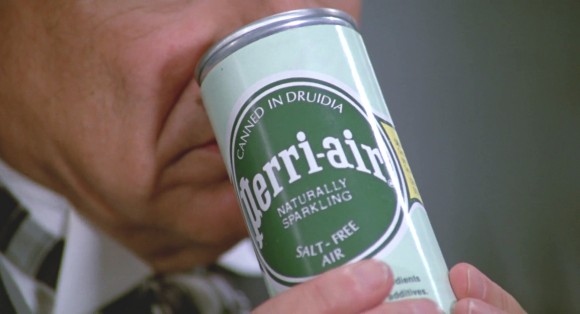 A space emperor inhales from his can of Perri-air, circa long ago.

Eventually the founders of the company moved up to compressed air in cans (along with compressed O2) with a direct-to-customer sales strategy. They changed from a “novelty” company to a “kinda sort health” company, business has picked up, and Vitality Air can’t ship this stuff out fast enough. And it’s becoming popular in the Chinese market.

As I long belabored in my Boost Oxygen video, cans of Oxygen (let alone regular air) like the ones sold by Vitality Air, Boost Oxygen, Oxygen4Energy, and Oxygen Plus are completely useless. They won’t help a beleaguered middle class Chinese guy as he hacks his way towards an agonizing and cancerous death.

Vitality Air looks like they cribbed their pitch directly from Boost Oxygen. Or maybe it was the other way around; I really have no idea, but I’m pretty sure that Boost came first. Either it’s a case of the one ripping off the other, or (more likely) there’s only so much to say about supplemental oxygen that a lawyer will let you put on a website.

Here’s what they have to say for themselves, taken right from their homepage:

The human body, and all living organisms alike cannot function at its best without a regular supply of high quality air/oxygen. The human body can easily live without food and water for weeks, and without sleep for around 7 days, however the effects of lack of oxygen can happen within minutes!

That’s almost an exact quote from Boost. And so I’ll inexactly repeat myself, too: We’re not living in an Oxygen-deficient environment. Neither are people in Beijing. So while you’re not wrong in those claims, they are completely irrelevant.

Our bodies require a regular supply of premium oxygen in order to function at its peak performance. By supplying our customers with fresh clean air as well as oxygen, we allow them to boost energy levels in a natural way, helps with hangovers, alertness, and working out!

“Premium oxygen”? What the shit is “premium oxygen”? Oxygen gas is specifically something that cannot come in varieties of “premiumness”. It’s either O2 or it ain’t.

And once again: For a healthy individual, supplemental oxygen does not provide any additional energy. A normal, healthy individual in a non-oxygen-deficient environment will have all 100% of their hemoglobin bound to oxygen. The best thing that they will accomplish by using supplemental O2 is to significantly increase the dollar (or yuan) cost of their exhalations.

Inhaling “fresh clean air” likewise will do absolutely nothing to increase energy.

And no, hangovers are not an illness that can be cured or improved by supplemental oxygen. (The placebo effect? That works wonders!)

As we continue to live in highly polluted areas, we are your solution to pollution!

YOU ARE NOT THE SOLUTION TO POLLUTION. If you want to argue this point, then answer these two questions: What is “tidal volume”, and how many liters of oxygen (or air) are in your cans?

For those of you that don’t know, tidal volume is the quantity of air that you inhale (and exhale) with each breath. Your own tidal volume will mostly depend upon your lung capacity and your level of activity. For example, a person with a lung capacity of 4 liters can inhale 4 liters of air (or oxygen) on each breath: That’s if they breathe in fully and deeply. At rest they will inhale and exhale a lower quantity of oxygen. Let’s say 1 liter.

If these cans of bullsh*t oxygen had a flow rate that matched the rate of a user’s inhalation (they don’t), and if their delivery mechanism allowed for a tight seal to the user’s face (they don’t), the user would get about 8 inhalations from one of their large 7.7 liter cans, at rest. At a cost of ten, twenty, or thirty dollars for each can, that’s a hell of a way to waste your money. A few extra lung-fulls of oxygen or clean air isn’t going to help you out in a toxic environment.

The reason that Vitality, Boost and all the others make grand claims such as “lasts up to 150 one second inhalations” is because the nozzles on the cans put out gas at such a low rate that barely any gas is emitted. So even if you believe the hype that oxygen or fresh mountain air is good for you, remember that you’re hardly getting any of it into your lungs on each breath.

Meaning that if you’re in a polluted environment and you’re sucking on one of these cans, you’ll be breathing something like 95% polluted air and 5% clean air (or oxygen) each time you inhale.

Oh, and that’s to say nothing for the oh-so-ironic environmental damage that results from shipping cans of air all around the globe.

I myself have been obsessively critical of FedEx on this very site. But S.co.tt is branded as some random jerk on the internet, not a snake-oil salesman trying to appear legit.

And so that’s why I don’t think it’s too hypocritical to share one of Vitality Air’s Twitter rants: I’ll just leave that there. Take it for what you will.

If you have any experiences with Vitality Air’s products, good or bad, I’ve love to know about it in the comments!

I'm a computer guy with a new house and a love of DIY projects. I like ranting, and long drives on your lawn. I don't post everything I do, but when I do, I post it here. Maybe.
View all posts by Scott →
Tagged  Boost Oxygen, Bullsh*t Products, rant, stupid corporations.
Bookmark the permalink.