It seems like every single FedEx delivery I receive has something wrong with it. I haven’t ranted about this in a few years, so let’s look at this week’s experience.

But first I’d like to say that my local FedEx delivery guy is top notch. He’s friendly, and I’ve seen him loading and unloading his truck outside our building and he doesn’t violently throw packages about. 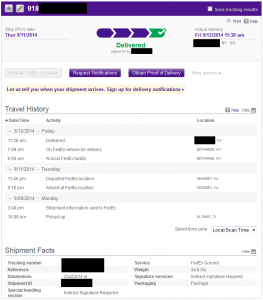 That looks pretty normal. They delivered a package from Texas to New York via ground in 4 days. Pretty good, actually.

Well that’s what the tracking screen looks like now that the package has been delivered.

But while it was in transit I wanted to do something crazy: Track my package.

Me: I got a ship notification with the tracking number.

FedEx: This is not a valid tracking number. We have no record of it.

Actually: It was picked up by FedEx about 16 hours prior.

Me: After checking a few times today, around 56 hours after the package was picked up I finally got some info using my tracking number.

FedEx: “Shipment information sent to FedEx.” No indication that it was picked up nor en route.

Actually: It was already en route to New Jersey from Texas.

FedEx: Now showing the pickup time and that package went through NJ a few hours ago.

Once the package was delivered most of the tracking information was there.

I say most because they still forgot to log one key piece of info: That the package ever left Texas. Check out that image again; It was in tracking limbo from TX to NJ.

I haven’t even opened it up yet, but the box is undamaged. So at least they got that right.

It’s not even consistent

Both of these snippets were pulled from the screenshot at the top of the page.

See that? The data isn’t even consistent within the same tracking report.

Of course it seems likely that the pickup date was genuinely the 8th, as that would have made sense for a ground shipment. But hey, maybe they lost the package in TX for a while and were forced to air ship it to make up time.

Scott, why are you so mad?

I’m not really. But the one thing FedEx is supposed to be really good at is tracking.

USPS is not good. Often I’ll get a package before their system even updates and recognizes the tracking number (though they have gotten better).

I expect the postal service to be slow and feckless (unfortunately), though I’ve had great luck with their priority mail service. FedEx built their reputation on logistics and tracking.

As for UPS? I’ve found that they tend to under-promise and over-deliver. Often when they say that the transit time for a package is 5 days I’ll get it in 4. They are either on-time or under-time. FedEx I’ve found to be quite the opposite. I’ve also had nearly 100% of my UPS tracking numbers show accurate information immediately following a pickup. (I know because I ship out via UPS with some frequency.)

If this were the first time I’ve seen mis- or under-informed tracking information from FedEx then it wouldn’t be a big deal. But I find their tracking system to be useless often enough that I’ve come to expect it.

In the 1980s computerized logistics and tracking were very impressive even at minimal levels of functionality.

Still using the same technology in 2014 is just embarrassing. (And if they’ve updated their systems and software since then, it’s even more embarrassing that they haven’t gotten it right).

It’s also very frustrating to customers when their package is in a black hole state of limbo for three days.

I'm a computer guy with a new house and a love of DIY projects. I like ranting, and long drives on your lawn. I don't post everything I do, but when I do, I post it here. Maybe.
View all posts by Scott →
Tagged  angry rant, FedEx, rant, stupid corporations.
Bookmark the permalink.