They’ve Rejected Another of My Fine Reviews

As regular readers of s.co.tt already know (basically just me), Home Depot had previously rejected my valiant attempt to warn other consumers about the fire hazard posed by one of their crap lamps.

Now, I’m publicly complaining about it being done yet again. This time they’ve rejected my upstanding and surely excellent review of their "Defiant Metal Surge with 4 ft. Cord".

Before I present my review, let me take you back to a special and turbulent period of time in my life: Two days ago.

Not only are metal power strips more durable, they’re also safer in the event of an internal short. Metal doesn’t burn (at least not at reasonable temperatures) unlike the plastic of a lower-quality strip. So a short circuit doesn’t necessarily mean an electrical fire: It more likely would mean a short to ground and a tripped circuit as the insulation melts off the internal wiring.

Here’s the item that was on display: 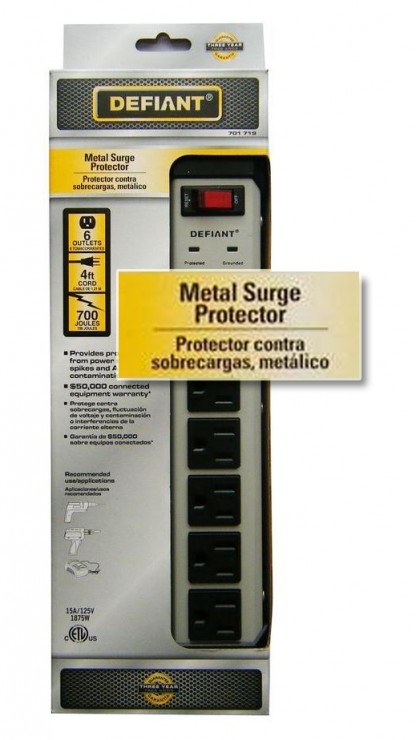 This is taken straight from HomeDepot.com, and is exactly what I saw in the store. Click image to enlarge.

See that? Clear as day it says Metal Surge Protector. That grey top part of the power strip is clearly made of metal.

Yes, there are obvious plastic end caps covering the metal both at the top and bottom, but to me it seemed wise to wrap the metal in dent-resistant plastic. Surely that was an extra sign of quality.

Then I took the power strips home, and here’s what one looks like out of the box:

In of itself I have no problem with this product. Plastic power strips aren’t the worst thing in the world. My problem is that it’s clearly advertised as being made of metal when in fact less than 30 percent of the casing is metal.

At what point does a power strip start being "metal"? I mean, does the copper in the wiring and contacts count? Because if so, then all power strips are "metal".

Needless to say, I gave this a 1-star review on HomeDepot.com. Here’s the original text that I submitted:

I prefer the durability and safety of metal surge protectors/power strips.

I bought this instead of a less expensive power strip because it proudly proclaims on the box that it is a “metal surge protector”.

Well, it has a metal cover plate. And that’s the only part of the power strip that’s visible from outside the packaging, so there’s no reason to believe that every other part of it is made of plastic.

There are two plastic end caps, and the entire base/chassis is plastic. Otherwise it seems like a power strip of reasonable quality. But I can’t recommend it because it’s sold as a “metal surge protector” and the majority of it is plastic.

Home Depot clearly did not agree with my stance on this issue, because they rejected my review a couple of days later.

I understand why they wouldn’t want to publish the review. It’s not flattering in the least. But that doesn’t make it any less of a valid review. Let me explain:

When reviewing a product, it has to be judged on the basis of reasonable expectations. In other words, it would be completely unfair to give a poor review to a Honda Civic simply because it won’t go 190 miles per hour like a high-end Ferrari. Yes, they’re both cars, but there was never a reasonable expectation that a Civic could go that fast. And so each car could receive an equally valid 5-star review because they meet (or exceed) the relative expectations of their respective customers.

Likewise, if Honda claimed that the Civic could go 190 MPH and someone bought it solely on that basis, they’d be perfectly justified in giving it a bad review when it could barely reach 125. (This is in my most humble of opinions, of course.)

So, if this product never said that it was a "Metal Surge Protector" then I may have given it a decent review, or at the very least left it alone.

However, they set a clear expectation that it would be made of metal, yet it was not. That means that the product doesn’t live up to the manufacturers claim, and it fails to deliver on expectations. It fails hard.

What do You Think?

Am I being too curmudgeonly? Would this product meet your expectations based on what you see? Let me know in the comments.

I'm a computer guy with a new house and a love of DIY projects. I like ranting, and long drives on your lawn. I don't post everything I do, but when I do, I post it here. Maybe.
View all posts by Scott →
Tagged  Home Depot, rant, review, stupid corporations.
Bookmark the permalink.