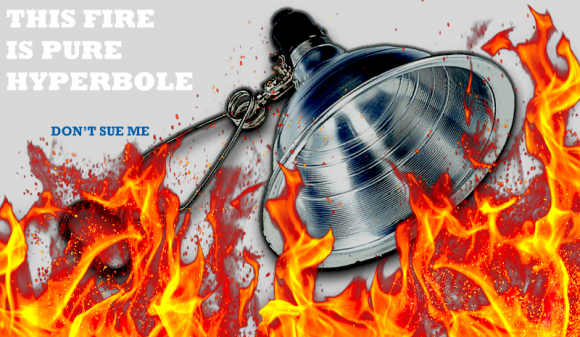 Just to be clear, Home Depot: Your terrible, terrible light has not been libeled.

I know that I tend to be harsh in my criticisms, but this is the most recent review that I tried to post to Home Depot’s site regarding their HDX 150-Watt Incandescent Clamp Light CE-300PDQ:

Very rarely do I wish I could give a product a negative number of stars, but this is one of them.

I know that for under ten bucks I shouldn’t expect an extremely high-quality, durable item. I know that at this price the light could fall apart completely after a bit of use and it wouldn’t be a huge deal.

But what it absolutely shouldn’t do is cause a fire, which is what TWO out of the SIX of these I own was about to do.

Let me explain: I bought six of these in total from 2 different Home Depots in my area for some hobbyist videography lighting. The point is that the faulty units came from different stores on different days, so they might well have been from separate lots.

The first faulty light that I bought developed a problem after about 3 weeks of very light use (no pun intended): The bulb wouldn’t illuminate unless it was wiggled into a very specific position. It wasn’t a problem with the contacts or the bulb — the issue was inside the socket assembly, which is riveted together and inaccessible.

With a bulb in just the “right” position the fixture would work. Except that after about a month of occasional use the bulb would flicker, and along with flickering it would make the sound of an electrical arc. Again, not the bulb’s fault — I swapped out the bulb more than a couple of times and the problem was the same. The contacts looked good, the wire was secure in the base, the switch seemed OK.

The second bad fixture worked for a little while. Then suddenly I went to plug it in and got no light, but really loud arcing quickly followed by smoke. It was doing this regardless of whether the switch was on or off. Needless to say I unplugged it, but being curious I removed the bulb and plugged the fixture back in. I still got the loud arcing.

This is clearly a problem with the units themselves.

These fixtures never left my basement. They were never dropped or abused; In fact, they were probably used for a total of a few hours. I was using 24W CFLs, too — not something that would generate a lot of heat. And those same CFLs worked (and still work) absolutely fine in other fixtures.

That’s why I’d recommend strongly AGAINST buying this product. If I’d have left either of those fixtures unattended or on a timer, I’d probably wouldn’t have time to write this review since I’d be too busy haggling with the insurance company over the price of a new house.

If you already own these, don’t leave them unattended. They may be working fine now, but just wait…

And the guidelines cited by Home Depot when rejecting my review:

I’m guessing that they didn’t appreciate my hyperbole at the end. But there’s nothing in their guidelines regarding sardonicism either, so I should be clear on that front.

By the way, let’s take a closer look at the third item in that list.

Why the fug can’t I mention competitors in my review? I assume that they mean competitors of Home Depot, not the product’s manufacturer. However, in this case HDX is a Home Depot brand. They are forbidding me from comparing this item to another item just like it from any other manufacturer.

That’s absolute horse hockey. There’s no way in hell that you can have a fair review section if you forbid comparison to similar items. Some of the most useful negative online reviews are ones that mention an alternate, better choice to satisfy the same need. Not on HomeDepot.com.

And I’m no fool. I understand that they don’t want you saying something like “just buy it at Lowe’s, it’s cheaper there!” Fair enough because even though that information could be valuable to another customer, prices fluctuate constantly. Price comparisons in reviews don’t hold water for very long.

But their guideline is far too broad. It would forbid a perfectly reasonable statement like “Lowe’s sells basically the same socket set under their Kobalt brand, and IMO it’s much better quality.” Ed note: That’s not my opinion, it’s just an example. I’ve never used a Kobalt socket set, but I’m quite happy with the Husky (HD’s brand) sockets that I have. Despite the fact that Husky is a very, very, very stupid brand name.

That’s a very useful bit of consumer advice, and is only fair if the reviewer indeed had experience with both tool sets. Yet I’m sure it would be immediately stricken from Home Depot’s site. Hey, prove me wrong Home Depot.

Not a word of that review is a lie.

If they want to sell an Instant Electrical Fire Kit, then at least put it on the shelves next to the fire extinguishers. My only regret is that I threw out the fixture that was arcing and smoking, because now I’d love to have made a video showing it causing the inevitable fire.

I hope you don’t mind, but I’m going to throw in some keywords…

…such as re-iterating that the model number is CE-300PDQ and telling you that the internet number on Home Depot’s site is 100354511 and that the store SKU is 277894. The light (if it didn’t malfunction catastrophically) is great for DIY projects, photography, videography, shop lighting, and temporary lighting. It’s commonly called a clamp light, but sometimes it’s called a work light, clip light, dish light, or wacky monzelfrazen.

Phew, hopefully that will cause this post to show up somewhere reasonably high on the Google results. If they don’t want the review on their site then I’ll gladly let people view it here.

It wouldn’t be a rant on s.co.tt if I didn’t mention some problems with their website:

They strip out carriage returns and line feeds.

Even though I took the time to format my review into paragraphs, they turned it into one fat blob of text. That’s a big pet peeve of mine, and a surprising number of sites do it.

They send too many emails.

After I’d submitted my review, their site prompted me to answer other customers’ questions about the product. I was in a giving mood, so I did.

The question was “does this lamp has a regular outlet plugin? (sic)”

They sent a separate “verify your email address” email for each of my 4 answers. That’s on top of a verification email for the review. The verification should be on a per-address basis, because the address doesn’t change.

Their reviews are powered by bazaarvoice.com.

I don’t trust Home Depot with my personal information, especially after their various — how to put it politely? — oopsies with their customer’s data. But who the frack is bazaarvoice.com?

Well, they are a legitimate company, and they must be doing pretty well to have Home Depot as a customer.

However, Home Depot fails to mention that you’re sharing your email address with Bazaarvoice, Inc., at least in any obvious way. The Bazaarvoice service is white labeled, so it fits in somewhat seamlessly with the design of HD’s website. When submitting a review, I could only find Bazaarvoice mentioned once in the terms and conditions.

Just because I became morbidly curious, I quickly looked in their “Privacy Security (sic)” page for any mention of Bazaarvoice. No mention. 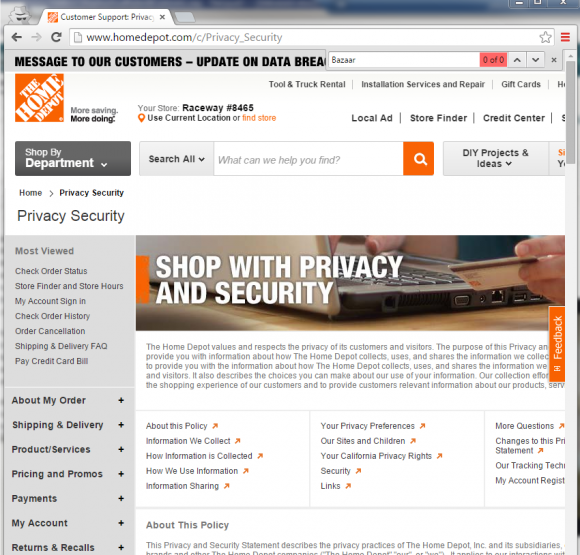 However, as soon as I clicked the link on the product page to “Write a Review“, there were tons of HTTP requests to Bazaarvoice’s site. 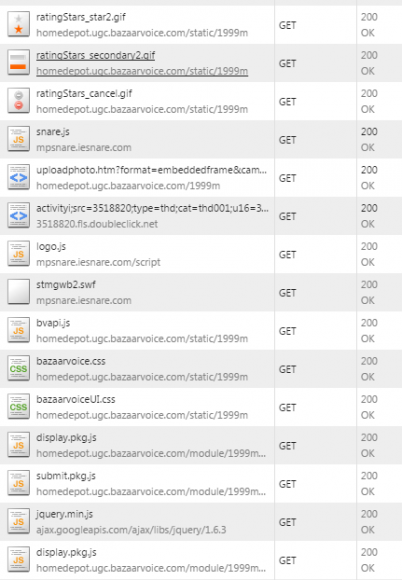 The review (and your email address) are sent to them as well. 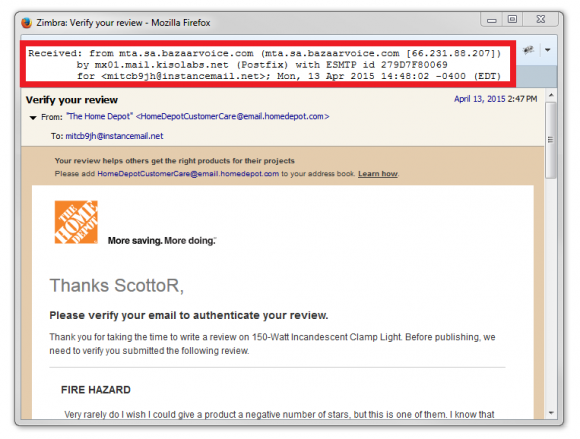 Bazaarvoice was actually the one sending the needlessly repetitious email verification messages.

This is exactly the sort of thing I had in mind when I made Instance Mail. There’s no reason to give these people your real email address. In fact, they ask for lots of demographic information as well, which I assume they aggregate and resell for marketing purposes. (Personally I provide all fake information, but I believe that the fields are optional.)

I suppose that I’m done ranting about Home Depot for today. I’m sure that I’ve got more somewhere deep inside, but I’ll save it for another day.

I'm a computer guy with a new house and a love of DIY projects. I like ranting, and long drives on your lawn. I don't post everything I do, but when I do, I post it here. Maybe.
View all posts by Scott →
Tagged  angry rant, electrical, rant, review, stupid corporations.
Bookmark the permalink.