Pyle o’Crap – The PCO875 Power Sequencer is Neither a Conditioner, Regulator, Surge Protector, or Noise Suppressor

I purchased a Pyle PCO875 Power Sequencer simply to make a video about it, because I didn’t believe all of its claims.

Though it does appear to be a somewhat-competently made power sequencer, the manufacturer’s statements about power conditioning, surge protection, spike suppression, filtering and so forth are all false.

In the video I covered the Amazon listing’s specs for the device, but the specs are much the same on Pyle’s own website so it was no mistake in importing it over to Amazon. I’ll some screenshots here for posterity, because hopefully they’ll eventually correct their “mistakes”, and I want to have a record of what statements they were making at the time this video was created: 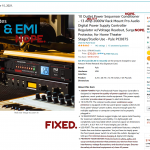 An assemblage of Pyle’s marketing of this device, with some corrections by yours truly. 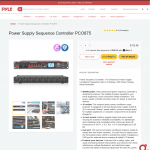 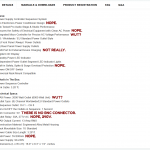 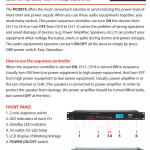 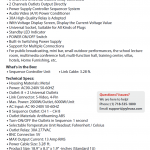 I did manage to throw 2650W-ish (around 24 Amps) through the device without it bursting into flames, and I’d say it would be fine at its 13A rating (or 2000W rating; They don’t make that clear at all). However, its lack of over-current protection (nope, not even a fuse or circuit breaker to be found) means that it could easily be called upon to conduct 20A or 2400W when plugged into an average commercial or home branch circuit. It would get a little warm under that condition, but my unit handled it OK.

A small manufacturing defect like a bad solder joint? That could have rendered my test to be much more exciting. 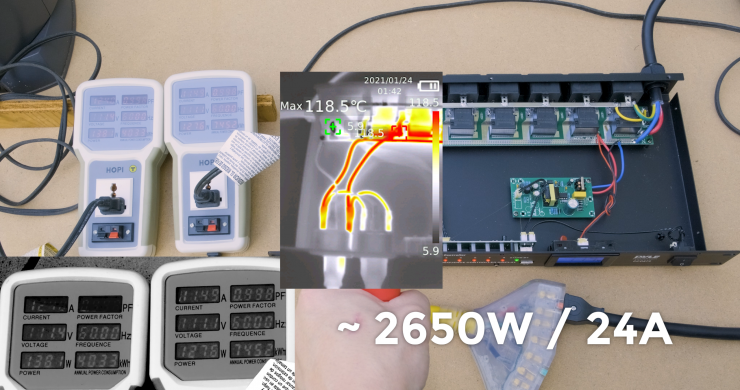 Just to be clear, there is absolutely nothing in the way of power conditioning, filtering, surge/spike suppression, EMI protection (except I guess the steel case?) or anything of the sort inside this device. The mains input connects directly to a pair of “bus bars” in the form of PCB traces, and those buses connect to the relays which then connect to the outlets. (In the case of the “always on” front receptacles it’s the same deal except no relays — they connect directly to the mains.)

There isn’t so much as a ferrite ring choke on the supply cord.

From a protection standpoint, you’d probably be better off with a cheap power strip, because at least those usually have over-current protection in the form of a wee push button breaker.

If this object were sold merely as a power sequencer with a USB port, I wouldn’t be nearly so hard on it, but even ignoring the marketing materials it did have some failings of its own:

*I didn’t talk about it in detail in the video, but that type of universal receptacle is dangerous. Full stop. I’m pretty sure they don’t meet North American or British standards, and I wouldn’t be surprised if they’re outside of regulations in other countries as well.

They’ll easily accept a 1/8″ phone plug or the tip of an RCA plug into the live pin of the socket, as well as even generously-sized screwdrivers. IMHO this is particularly hazardous in a rack. I’ve had the experience of working in the ass-end of dark and densely packed racks, and it’s all too easy to miss and hit the wrong hole with the wrong thing. Usually it’s only as bad as hooking a video output to another output or some such, but on a bad day without enough coffee, who knows?

Anyways, I’m not saying don’t buy the thing. If it’s suitable for your purposes given all the information here, who am I to stop you? It held up better than expected in testing, and at least the case is bonded to ground and made of thicker steel than I expected in case the worst happens.

I do wish Pyle would represent this product’s features (or lack thereof) accurately in its product description and marketing materials, however.

I'm a computer guy with a new house and a love of DIY projects. I like ranting, and long drives on your lawn. I don't post everything I do, but when I do, I post it here. Maybe.
View all posts by Scott →
Tagged  Amazon, Bullsh*t Products, Pyle, review, video production.
Bookmark the permalink.