Clone a Dynamic Disk to a New SSD in Windows 10 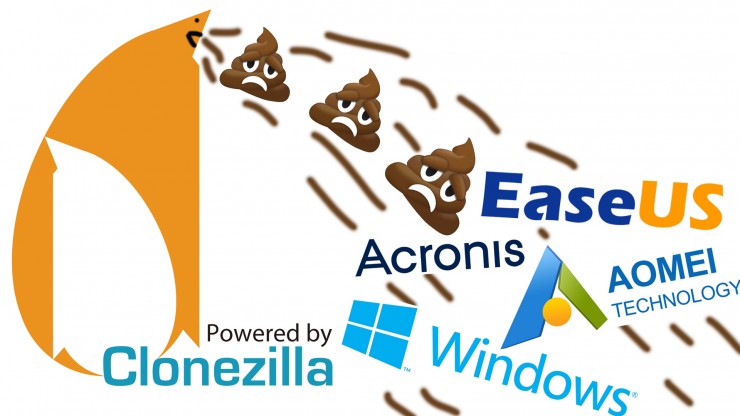 This is partially just for my own reference, so I don’t have to go down this rabbit hole again. (But I hope it helps you, too!)

I wanted to upgrade the LITE-ON 256GB SSD in my trusty ol’ Lenovo X1 Carbon laptop to a snazzy new Samsung 960 EVO 2TB drive. I have a version of Acronis that came with a Crucial (or Kingston?) SSD, which has worked great in the past. The problem?

In a moment of errant stupidity, I said, “Ah-hah! If I make the drive a dynamic disk, that will allow me to rearrange the partitions!” (It most certainly will not.)

So I made the main boot drive a dynamic disk. I didn’t think for a second that would render the drive un-clone-able by most any software. Yet, that’s what it did.

The free versions of the paid tools (the former three) would not clone dynamic disks, though some claimed that the paid/pro version would. However I wasn’t going to shell out between $49 and $99 to do something that should be free.

Clonezilla had no problem actually cloning the drive, but a non-proportional clone resulted in the remaining ~1.75TB being unusable. I couldn’t create a partition on it using Windows (either in the GUI or using diskpart), and so I tried booting into gparted and creating a new NTFS partition at the end of the disk. That ostensibly worked fine, but then I got the dreaded INACCESSIBLE_BOOT_DEVICE error.

The same error resulted when doing a proportional clone in Clonezilla.

You can’t create a RAID array using a USB drive.. Or at least I couldn’t. (The new SSD was housed temporarily in a USB enclosure.)

Windows Image Backup worked to do the actual.. ahem.. backup, but when I went to restore I got some obscure error about the volume shadow copy service (?????).

And dd just caused the thing not to boot.

If you make one minor mistake while doing the below, you could wipe out all the data on your original drive.

Heck, even if you do everything right, your original drive might decide to poop the bed.

So before doing any of this back up your important files to a flash drive, another SSD, a hard drive, a cloud, or 4,000,000,000,000 punch cards. Show the hex representations of each file to an android so that he/she/it can later recreate them via a keyboard with their hands but a blur.

Literally anything is better than just assuming you’ll pull this off without issue.

I put the new 2TB SSD in the laptop and wiped the partitions using gparted. (You won’t have to do this if you’re starting from scratch, as there won’t be any partitions.)

Then I installed a fresh copy of Windows 10 using the default settings.

When you’re installing this fresh copy of Windows, leave the network disconnected because you don’t want to get snagged into doing lengthy updates for no reason.

Furthermore, don’t bother changing any settings or doing anything other than the default procedure. Because the next step will wipe all of that out.

Connect the original SSD via USB (or via whatever).

Set it to expert mode.

Don’t let expert mode intimidate you. Most everything is going to stay at the default.

Choose the OS partition on your original drive as the source.

Choose the OS partition on the new drive as the target.

Check and check again and again that you have the right source and target selected. If you get it the wrong way around, you’ll end up with your virgin Windows install overwriting your original OS and related files.

When the option comes up, choose to clone the partition proportionally so that it fills the disk. (I’m assuming that you’re going up in size to a larger drive like I was. But either way it should work even if you’re using a drive of the same size. Smaller will not work.)

Once complete, disconnect the original SSD that’s connected via USB, and remove the Clonezilla flash drive.

Reboot, and you should now have a functional copy of your old system drive.

The new drive will also be marked as a basic disk and can therefore be cloned by most any software until your heart’s content.

I'm a computer guy with a new house and a love of DIY projects. I like ranting, and long drives on your lawn. I don't post everything I do, but when I do, I post it here. Maybe.
View all posts by Scott →
Tagged  backups, clonezilla, computer, disk clone, howto, Windows, Windows 10.
Bookmark the permalink.