Man, oh man! I was getting frustrated with my new 6100D LTE gateway from Sprint. In fact, I posted a very long rant about it yesterday. What is that? Oh, not much, just the native Netgear configuration GUI.

It has about ten times the feature set of Sprint’s half-baked GUI. Seriously.

Already have a problem?

This didn’t happen to me at first, but I must have triggered some state within the 6100D that causes this screen to appear when returning to the Netgear GUI after having used the Sprint GUI: 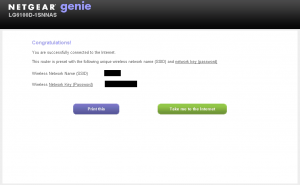 If you find yourself redirected to this utterly pointless landing page, just change the path of the URL to /adv_index.asp (I assume you want the advanced config page).

Clicking “Take me to the Internet” uselessly takes you to Netgear’s site.

What can it do that the Sprint branded GUI can’t?

…and that’s just what I found on my first quick look.

…the bad and the ugly

*Check out the N600 User Manual. It describes a lot of the 6100D settings in more detail than the Sprint documentation.

I don’t mean to harp on this, but it’s so significant that I can’t help it:

There is an an unprotected telnet server that cannot be turned off, requires no authentication, and lets anyone view and MODIFY the router’s config. This includes VIEWING THE ADMIN PASSWORD IN PLAINTEXT!

For no consistent reason that I can discern, the device will start flooding the LAN with IGMP (multicast) messages. For example:

It’s creating these messages as fast as it can; When this is happening igmpproxy uses around 75% CPU with the remainder used for IO. The GUI also becomes unresponsive. Fortunately BusyBox (via telnet) does not, so a remote reboot is possible.

This IGMP activity lasts a few minutes, but then refreshing the GUI causes (?) it to start again. I haven’t spent a lot of time testing this issue, but it is a PITA.

Then we have a nice one where the router seems use THE MAC ADDRESS for port forwarding regardless of the actual IP setting.

For example, let’s look at this composite of screencaps: 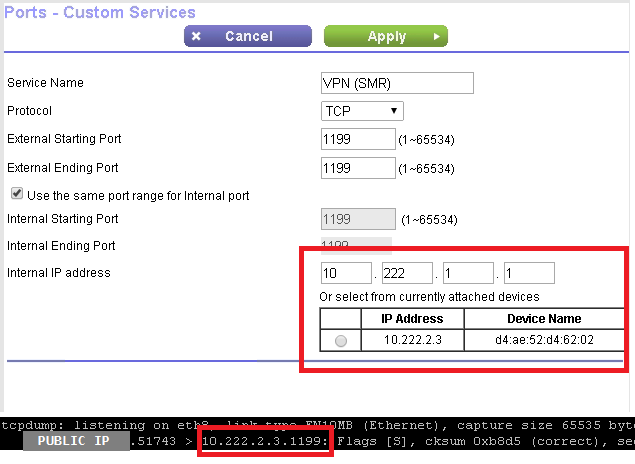 On the top is the active port forwarding configuration of the 6100D, after a save. On the bottom is a tcpdump of the traffic between the 6100D and my core router.

Where is it getting the IP address 10.222.2.3? Well, it’s right there in the lower right of the device settings. But that option is NOT selected.

Why is it showing that IP? Without getting into too much detail, I have two core routers running in a master/backup configuration. They each have a “real” IP on the 10.222.1.0/16 network (last octets being 3 and 4 respectively, as well as a VIP (last octet of 1).

The routers are also my VPN servers, so I want VPN traffic (in this example) sent to the VIP, which is 10.222.1.1. This way it doesn’t matter if the backup router takes over; The VIP will be reassigned to it and traffic will continue to flow.

My misconfiguration is not the cause of the problem, because even after I changed the “real” IP on the router to 10.222.1.3, it still sent traffic to that IP instead of the VIP!

However, both the “real” IP and the VIP have the same MAC address. This shouldn’t be a problem either, because we only need to use the ARP table to find the MAC address for the IP, and not the other way around. Here’s the ARP table on the 6100D:

For some reason it’s picking the first MAC address and forwarding traffic there; I have no idea why they designed it like that!

Let’s dig into the config file (located at /WFIO/current.cfg in the 6100D’s unsecured BusyBox environment):

First of all, why does it have two services enabled by default and not listed in the GUI?

So the setting in the GUI for “Internal IP address” is actually the setting for the host name!?!?

The worst part is that if I go into the BusyBox environment and manually change the LANIPAddress field to the correct IP, upon reboot it changes it right back. There’s no way to win with this thing!

The problem arises that both of my core routers have different MAC addresses. So if this thing is basing its decisions on the MAC address, what’s going to happen when the master fails and the backup takes over? The master’s MAC address will be offline. The VIP will still be online, but this thing may just ignore it.

(By the way, this is a testing environment. That’s why you don’t see an entry in the ARP table for the backup router’s IP.)

I could remove the “real” IP address from the routers and just use a VIP, but that is irritating from an administrative perspective because the backup router will be unaddressable on this network. Also, it may not solve the problem because the MAC address of the VIP will of course change in the event of a failure.

I also can’t give the master and backup the same MAC address, because that would confuse any device connected to this network.

Sigh. This will require more testing.

The solution is simple, obvious, and of course it took a couple of hours to think of it:

In other words, the LAN configuration on the 6100D is now:

Despite having yet another IP on that physical network, it’s fenced from the others by its subnet mask (so the 6100D isn’t just basing its decisions on the MAC address). Here we see the correct IP is detected for the core router’s MAC address:

Apparently the 6100D is a real slave to subnets.

Before fiddling with port forwarding and various other settings, I saved one setting in the Netgear GUI: I added a static route. That resulted in this snippet being added to the config file:

The following entry was also added, even though I didn’t modify the NTP settings:

Otherwise it doesn’t look like anything else was altered, aside from some timestamps (phew). More importantly, the router still works!

That’s important because I was concerned that the Netgear GUI might wipe out or otherwise alter important settings that the Sprint GUI had added in.

I keep talking about the GUIs because the fact is that I don’t know if there is any difference between the two GUIs as far as configuration management on the back end goes. They may well use the same configuration management scheme, in which case of course they won’t conflict! But it’s possible that they manage the config differently, and could kill each other’s settings.

I just found out about this roughly 30 minutes ago. I have no idea what undesirable consequences might arise from changing settings in the Netgear GUI. I don’t even know if all of them will work as intended. So use this information at your own risk!

I'm a computer guy with a new house and a love of DIY projects. I like ranting, and long drives on your lawn. I don't post everything I do, but when I do, I post it here. Maybe.
View all posts by Scott →
Tagged  Netgear, routers, Sprint.
Bookmark the permalink.