Notice: get_the_excerpt was called with an argument that is deprecated since version 2.3 with no alternative available. in /var/www/s.co.tt/wp-includes/functions.php on line 3497

Unfortunately, if you want a subsidized phone today you’re stuck with carrier bloatware. I’m replacing a Samsung Galaxy Nexus with an HTC One, but if I had my druthers I’d have ordered the Galaxy S4 Play Edition. The problem is that I can’t bring myself to effectively spend $510 on stock Android; software that’s free.

The Galaxy Nexus is a great phone. In two years of case-less operation, it hardly has a scratch on it. It survived drops, bumps, bangs, and all the other rigors of daily use. It has a replaceable battery and an SD card slot. In fact, Samsung’s bloatware was the only thing that stopped me from getting Verizon’s Galaxy S4.

Like I said, this is going to be a nitpick review. The phone is efficiently and pleasantly packaged, though I find that to be completely irrelevant. The phone itself came out of the box with a tiny scratch on the aluminum back, and the SIM slot looked like it had been very lightly jimmyed with a screwdriver. I don’t know if that’s a quality control issue on HTC’s end, or if Verizon pre-loads the SIM card after HTC passes the phone on to them. Either way, it’s disappointing.

It’s also not quite enough reason to return the phone, because I’ll probably scratch the delicate aluminum surface in a few days. (Unlike most fanboys, I prefer a plastic case. Plastic bounces back, whereas aluminum will simply dent.)

This section should be titled The Lack of Activation. I went through the “switch/activate phone” process on Verizon’s website and then booted up the device. I waited, and waited, then waited some more. I rebooted, and waited again. 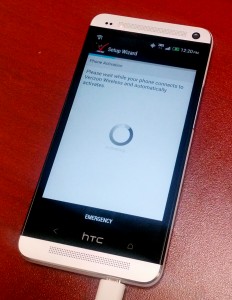 HTC One Waiting for activation

“Please wait while your phone connects to Verizon Wireless and automatically activates” is the only user experience I had with the phone in the three hours of ownership.

I already have one pet peeve with the One, which is probably a Sense issue: If the screen goes into standby and I immediately hit the power/unlock button, it sends me back to the lock screen. On the Nexus (stock Android), it would give a grace period of a second or two where the unlock button would simply turn the screen back on. That’s a great feature when you’re waiting for something to download or, for example, waiting for a phone to activate.

Still no activation after two hours. I tried chatting online, but none of their representatives were available. There’s no option to enter a queue, so I guess I could have just hit F5 until I became bored. 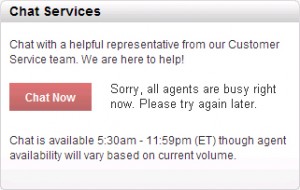 Since it appeared that the online activation hadn’t worked, I called the activation phone number that VZW provided with the phone. It politely told me that activation may take up to 20 minutes. I waited 30 minutes with no result, and so reluctantly called VZW’s customer support line.

I was pleasantly surprised that, after trudging through some menus, a very helpful rep picked up on the first ring. She went through the activation process on her end, and while we were waiting told me that whenever she got a new [Verizon] phone the web-based activation wouldn’t work, and she’d have to call in. Their website is terrible, but this customer support person was fantastic.

My last two phones — the original Droid and the Nexus — both ran stock Android. In fact, that was one of my primary purchase considerations. I hate bloatware, and with many phones the problem is doubled by the carrier and the manufacturer each adding tons of their own irrelevant nonsense.

The HTC Sense UI and feature set isn’t terribly annoying. Verizon included some apps, of course, but all of them can be either disabled or hidden away. I chose to skip the creation of an HTC cloud account.

In my hand, the One feels cumbersome compared to the Nexus, but I think that might just be new-phone-itis. The two devices are almost exactly the same height and width, the Nexus being a little thinner at the top and thicker at the bottom. I think the problem is the aluminum back on the One. It’s slippery compared to the textured plastic of the Nexus, and the Nexus’ thicker bottom makes it feel more planted in my hand.

The obvious solution would be to buy a case for the phone, but I don’t believe in cases: Manufacturers spend millions of dollars on R&D to make phones small, sleek, and pretty. Then consumers spend millions of dollars covering their phones in lumps of plastic and neoprene. It’s mind boggling. If a phone is well made, it’ll survive drops, scrapes, and bangs. If it isn’t well made, then it should be taken off the market. Of course I understand that someone with a physically demanding job may need extra protection, but when I see and office worker holding an iPhone 5 that’s twice as thick and half a centimeter wider and longer than it should be, I wonder why Apple even bothers to spend money on industrial design.

The default home screen with the feed of things that other people are doing is not for me. Though it can’t be removed, it’s easy enough to set another panel as the default home. With that done, the phone already has a much more stock ‘droid feel.

However! This brings me to one of the stupidest, most asinine, and illogical design choices of the sense UI: The home panel(s) have a grid size of 4 x 4, and it can’t be changed. That means 16 app icons or a few widgets, maximum. On a phone with a 1080×1920-pixel screen!

By comparison, the Nexus with stock Android has a 4 x 5 grid size with a resolution of 720×1280. The HTC screen has more empty space on it than it does icons! I wouldn’t mind if that were just the default, but not being able to change it is absurd.

This is another pet peeve of mine: Port placement. Laptops, cell phones, and MP3 players rarely get it right.

The One has two ports: A USB port and a 3.5″ TRS jack. The USB is on the bottom, and the 3.5″ TRS is on the top. That’s very poor design for any use case where you’d want to use both jacks at the same time and have the phone sitting vertically. Particularly if you put the phone in your car’s cup holder and want to both charge it and listen to music.

The Nexus has both the USB and audio ports on the bottom which meant that the phone would have to be awkwardly upside-down, but at least it wouldn’t put strain on either connector.

(Laptop manufacturers can’t stop themselves from putting ports on three — sometimes four — sides of their devices. USB plugs end up sticking out over the mouse pad, and forget about sitting cross-legged!)

Obviously moving from “720” to “1080” is a huge difference as far as image crispness and font rendering go. But I’m already missing the deep contrast of my old OLED screen. While the HTC One’s IPS panel is nothing to sneeze at, just looking at the home screen icons side-by-side on both phones is like looking at a 1960s photograph and a modern day print.

For example, the GroupMe icon on the Nexus is a rich, vibrant blue. On the One it’s just bland cyan. The color wheel of the Chrome icon is boring on the One, and eye-catching on the Nexus.

Of course, on the Nexus I can actually see each pixel, whereas on the One the icons look like a solid surface. It does make me wonder what I’m missing on the S4’s 1080 OLED screen, which supposedly has been improved since the Nexus.

It’s the same deal with photos and videos: Because of the higher resolution on the One, detail is much finer but contrast and color reproduction just isn’t as good. I suppose that the OLED vs. LCD argument is very similar to the old plasma TV vs. LCD TV argument. I’m definitely in the OLED camp, though.

My final gripe in this section isn’t really about the screen itself, but about the way it’s used.

At work I use an older Dell Precision M6400. It has a Core2 Duo processor and 7200 RPM SATA drives, but for coding I don’t need a terribly fast system. What I do need, want, and like is a lot of visual real estate and it’s one of the few laptops out there with a 1920x1200 display.

The HTC One has 1.15 MILLION more pixels (over twice as many) as the Nexus, but it seems to display just as much, or less. Yes, I can set the font size smaller and it still looks good, but I want to scale everything smaller. I want smaller (and therefore more) icons on my home screen, more emails listed per page, more photo thumbnails, and more of everything else. My eyes aren’t good, but I wear glasses so that I can see things that are small.

Of course I could install a custom ROM or an aftermarket app manager. But options like display scaling should be built in from the start.

I’m not a big ringtones guy. The only custom ringtone I use is Chev Chelios’ ringer from the Crank movies. Usually I’m satisfied with the stock rings and notifications. But! The Galaxy Nexus (and likely other Sammy phones) has some great notifications. Nice, soothing tones that are plainly audible, but not startling. That’s what I like for my email, particularly.

I get a lot of emails from various servers telling me when processes complete, and when there are problems. Emails come in morning, noon, and night, so I don’t want sounds that are too intrusive. The Samsung’s were spot on, but the HTC’s are mostly too sharp, too loud, or both. They’re very audible; Great for urgent messages, but bad for everything else.

So now with a quick copy, my One sounds like my Nexus, and I’m happier.

I'm a computer guy with a new house and a love of DIY projects. I like ranting, and long drives on your lawn. I don't post everything I do, but when I do, I post it here. Maybe.
View all posts by Scott →
Tagged  Galaxy Nexus, HTC One, rant, stupid corporations, Verizon Wireless.
Bookmark the permalink.