If you’ve read my blog, you know that I have a quite a few servers in my basement that I use as a home lab environment.

For home or low-demand virtualization, you can’t beat the Dell R905 for price. Consider that, as of the time I’m writing this post, you can get an R905 like I did with 128 GB of RAM for about $960. That’s only a little more than the cost of the RAM!

That machine has 4x AMD Opteron 8356 quad-core CPUs @ 2.3Ghz and two built-in 10gbps ethernet ports (plus 2 gigabit ports), a PERC6i controller, dual PSUs, and a full enterprise DRAC. It’s a little old, but you can’t get those specs in any other machine in a nearby price range. (OK, the R900 and the HP DL580 are very similar in spec and sometimes comparably priced).

I chose an R905 in part because it only has 4 big 120mm fans (in redundant pairs). Larger and fewer fans generally makes for a quieter machine, and sometimes this enterprise hardware can get awfully loud. I was really lucky when I got it racked and found that it was indeed very quiet. Small office quiet, even under moderate load and in a 79F degree room. (I think the fans were spinning somewhere around 2000 RPM).

It all fell apart though when I added a PERC6/E to support an HP MSA70 DAS to supplement the R905’s measly 8 2.5″ hot-swap drive bays. For some reason the BMC (which monitors and controls the fans, amongst other things) decided that the PERC6/E was the last straw and started running the fans at 5175 RPM constantly. And that is most certainly not quiet.

After assessing my options, I decided to modify the fans. I didn’t have a solid plan, but I figured that some 555 timers, a few capacitors and resistors could change the tachometer signal coming out of the fan to trick the BMC into thinking that the fan was spinning faster than it actually was. Of course, I didn’t want to make these modifications on the only four fans I had on hand — the four that were actually keeping the system cool — so I decided to buy another four from eBay. They were only $40 all-in!

One eBay listing in particular caught my eye. It said “Buyer may receive a fan produced by one of 6 different manufacturers (see picture below). But, no matter who the manufacturer is, the fan is guaranteed!!” The manufacturers included Delta, NMB, Nidec, and JMC/Datech. And interestingly enough, from the pictures it looked like the different brands had different blade configurations.

Images borrowed from the auction page of red_planet_trading on eBay 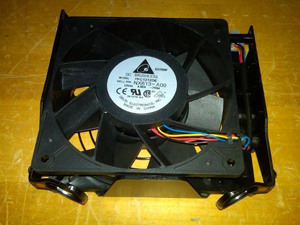 The Delta fan I ordered. Picture is from the auction listing by steals_an_deals. They shipped quickly and the order went smoothly.

From the specifications (particularly the lower power draw), I surmised that the Delta fans might spin more slowly than the Nidecs to move the same amount of air. On the other hand, the lower CFM rating on the Deltas might mean that they would need to spin faster to keep up with the airflow of the Nidecs. I held off on ordering 555 timers until I could try out the new fans.

Happily, the Deltas are significantly quieter! When the server’s cover is taken off, the fans spool up to maximum RPM. As I hot-swapped each Nidec for a Delta, I could hear the sound decreasing. After putting the cover back on, the fans gradually throttled down and I monitored their speed through Dell OpenManage. When the Deltas hit ~5175 RPM (the speed at which the Nidecs had been running), they were significantly quieter. They eventually leveled off around 4500 RPM and a very tolerable volume (though not as low as prior to adding the PERC6/E).

The moral of the story is this: There are probably many OEM-approved fans out there for your server. Look into their specifications (many times the mfr. will publish sound levels at varying RPMs), and find the most “silent” ones. It’s not always worth it to risk messing up your cooling and burning out your system with custom mods!

Update: Another interesting note from all of this is that the fans made for Dell have 5 wires, whereas on the spec sheets for the generic version of the same fans they only have four wires. The four wires are for power, PWM control, tachometer, and ground. I don’t know why the Dells have the fifth. My guess is that it’s a sense lead so the BMC can identify the fan from amongst the different brands and models. If anyone knows the real answer, please leave a comment!

I'm a computer guy with a new house and a love of DIY projects. I like ranting, and long drives on your lawn. I don't post everything I do, but when I do, I post it here. Maybe.
View all posts by Scott →
Tagged  dell, fan noise, fans loud, poweredge, r905.
Bookmark the permalink.