Eulogy for the Jeep

Back when it was en vogue to play music from Compact Discs, the Death and Destruction mixes provided adequate motivation to ruin lawns.

Mo once took the Jeep to Florida, and Sag fixed the intermittent wipers in his anger.  Another time nine people took it on a camping trip that ended poorly, with no camping.

It went to Pittsburgh twice, getting towed only once.  It had a laptop mount, because that’s important.  We yelled at passers-by with a megaphone until the police made us stop.

It got pulled over by the police more times than anyone can remember, and even had its license plates confiscated in the name of gross irresponsibility.

Sure, it crashed into some things unintentionally, but that never caused a real problem.  It was unstoppable, until it stopped.

One person peed themselves in the back seat, and another person vomited all across the side.  It helped move numerous people into and out of dorms, apartments, and houses.  It sometimes leaked oil in irritation.

Eventually it started to feel its age.  If the oil pump is like the heart and the air conditioning is like the sweat glands, then it was seriously fucked.   Also, the windows wouldn’t work, and those are like eyelids.

So now let us bow our heads and pretend to be serious and look at these pictures. 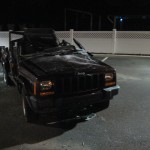 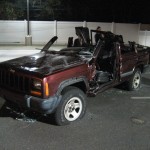 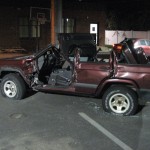 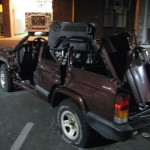 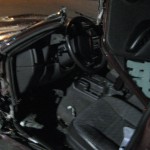 I'm a computer guy with a new house and a love of DIY projects. I like ranting, and long drives on your lawn. I don't post everything I do, but when I do, I post it here. Maybe.
View all posts by Scott →
Tagged  automotive, Jeep XJ.
Bookmark the permalink.