This is a follow-up to my previous post, Chevy Volt Metered Charging (Phase I).

In the first phase, I ran a new dedicated circuit from the subpanel in my garage to the opposite wall to connect a 120V charging station.  In this phase, I removed the existing receptacle, rewired for 240V, installed the Voltec Level 2 charging station, and wired the kWh meter inline.

It’s not my intent to write a full set of instructions for installation here.  The purpose of this post is to illustrate some of the installation steps with real-world pictures, which are somewhat hard to come by online (the pictures are rather small, but you can click on any of them for a larger version).

As with all electrical installations, follow all manufacturer directions, specifications, and applicable local/national codes when installing your equipment.

The first step was ordering the Voltec Charge Station from SPX.  Information can be found here:

Ordering from SPX was easy;  Their sales rep was very helpful, and because I’d previously applied for their “free” charging station they already had my info on file.  I had placed my order in the afternoon on 5/31, and had delivery the morning of 6/6, putting it under a quite respectable 4 business days (hooray for UPS). The contents of the Voltec Charge Station package: Instructions, warranty information, and the charging station itself.

The charging station comes fully assembled, and the instructions are very straight-forward.  One caveat with the warranty:  If you do a self-installation, the warranty period is one year, versus three years when you have the unit professionally installed.  In my opinion, self-install is still the way to go, because a professional installation can easily cost more than buying a second charger should the first one fail.

To start the installation, you will need a Torx driver.  I had bought a set a few months ago (which I needed just to replace the air filter in Amanda’s old Saab — a rant for another day), which attach to a standard 3/8″ drive head.  That makes taking out the six screws a breeze: 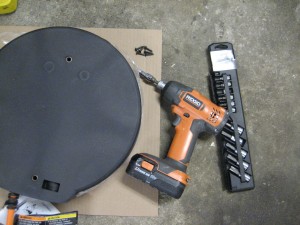 Opening the back with a Torx driver. It's just a coincidence that my Ridgid driver matches the charge station, I swear.

I put the unit face down on cardboard to avoid scratching it.  Next step is separating the two halves, minding the ribbon cable that connects them.

The cover removed from the charging station

The connector on the ribbon cable simply pulls out of its mate on the circuit board.  Don’t worry about how the pins line up — it’s keyed to only reattach one way. A close-up of the charging station's PCB and wiring connections.

I couldn’t resist taking apart the charging station first, but had to get back to the business of prepping the wiring for 240 Volts.

This started with removing the 120V receptacle.  I was careful to cut the hole for the receptacle where I thought the wiring connector for the Voltec would land, and also so that the charging station would cover it completely.  (That turned out pretty well, which was partially dumb luck on my part). The existing receptacle unit and box came out easily.

I disconnected the receptacle unit and left as much wire as possible in tact.  I also stripped the sheath off the armored cable by a bit more — you’ll see later that I just barely had enough wiring left inside the unit to make up the connections.

Next step was changing the temporary 120V connections in the breaker panel over to 240V. The Voltec circuit is attached to the breaker in the upper-left.

This was probably the least complicated step of the installation and involved moving the red wire in the upper-left from its very temporary connection at the neutral buss over to the second pole of the breaker.

The next step was wiring the meter.  I thought the meter was a must-have, because it will allow me to get very accurate numbers as far as KWh/mile, and therefore $/mile.  There are a lot of numbers floating around online, but this will let me make calculations based upon my Volt (well, Amanda’s Volt), with my electric rates.

Installing a meter is neither expensive nor difficult.  I got the head on eBay (used/reconditioned) for $36 all-in, and the socket from Home Depot for $25.  And it’s just a few extra electrical connections: Connecting the meter socket’s terminals were not as straightforward as I’d hoped, but not all that complicated once you realize what’s going on in that picture.

The label on the pan specifies that the terminal lugs for the line/load (“hot”) connections can accept a minimum of #8 AWG wiring, with a maximum of #2/0.  Since the circuit is only 20A and therefore wired with #12 AWG, a problem arises. Label showing details of the meter pan. As with all pictures in this post, click to enlarge.

The “neutral” terminals (which I’m using to bond the box to ground as there is no neutral conductor in this installation) can accept my #12 wire.

With those connections made, the meter head plugged in, and the cover in place, I fired it up for a test (I capped the wires hanging out of the wall first).

That lead to some good feedback for the eBay seller.  Of course, I have no idea of the degree of accuracy of this meter.  I’m willing to assume that it’s accurate enough for my purposes.

Now back to the Voltec Charge Station.  That’s probably why you’re reading this post to begin with, but this part of the installation can’t be easier.  You just need two screws to attach this thing to the wall (I’d recommend hitting a stud if you have a framed garage — the unit is light, but the charging cable is quite heavy and I wouldn’t trust drywall anchors to hold it).  Then it’s 3 screw terminals for the wiring and you’re done!  Well, almost done.  As you’ll see, attaching the cover can be a problem if you’re not prepared. I used ceramic-coated 3″ deck screws and a couple of washers for mounting.  They’re a little beefier than drywall screws (plus I had them laying around).  I don’t think a thick lag screw is really necessary for the weight of the unit/cable.

Three electrical connections is all it takes: Close-up of the wiring connections.

I didn’t trim the leads for the supply wires at all.  The length just happened to work out very well, which saved me some extra time re-running the cable up to the meter.  (It’s hard to tell in the picture, but there’s about a half-inch clearance between the PCB and the supply wires, and they’re laid in there quite comfortably).

The final step is applying the cover, and turning on the power.  Applying the cover was one of those things that annoys me about engineers.  The screws attach from the back, and are flared out at maybe 30 degrees from the wall. It was really just dumb luck that I had this drive head sitting around in my garage.

This makes reattaching the cover a minor pain in the neck.  If you don’t have a little Torx driver (or driver head), go out and get one before starting this project.  I forgot what size I needed, but get a set of them.  Torx screws seem to always pop up when you least expect/want them to.

Why the engineers that designed this thing couldn’t use hex-head screws is beyond me.  Pretty much everyone has Allen keys around from old Ikea projects or whatnot, and they’re ideal for this sort of tight space.

It wasn’t all bad, though.  I was able to get the screws seated just by hand tightening.

And here’s the result: The installation as described above took just a little over an hour.  Of course, I did the bulk of the prep work in Phase I, and that project took more than a few hours.

If you have any questions or want any additional details, please post in the comments below.

I wanted to comment on the build quality of the Voltec Charge Station.  I was neither impressed nor disappointed with the unit itself.

As I wrote earlier, the charging station is not heavy at all.  I can’t say that it feels flimsy, but the edges around the cover are rather thin plastic, and it’s almost hard to believe that it’s a weather-tight enclosure suitable for outdoor use.  Let’s just say that it definitely has the feel of a residential appliance.

The charge cord is quite heavy. The ship weight of the charging station is 18 lbs., and the cord could easily account for 12 lbs. of that weight.  I only bring that up because I’ve seen lighter cords attached to heavier-built units that eventually worked their way loose from their mounting points.

But wait, the charge cord also isn’t heavy enough! The conductors in the charge cord that carry the full charge current, approximately 15A, are 14 gauge.   While I’m sure that’s technically sufficient to satisfy any safety requirements, the cord still becomes quite warm while the Volt is connected and charging.  12 gauge wire would have been a better choice (IMHO), but of course would have made the cord heavier still.

Finally, I don’t like the fact that the cord is coiled.  I vaguely remember from childhood something called a “corded phone” (well, we called it a “phone”).   The sound clarity was great, but do you remember what eventually happened to all of those curly cords?  Have you ever had to untangle one?  Sure you have.  And it sucks.

Despite all of these complaints, the Voltec Charge Station is your best bet for the money.  I don’t see a need for a heavier-duty unit in my garage, and though $500 isn’t cheap, I could buy 4 of these things for what a low-end commercial grade charging station might cost.   The heat emitted by the cable is a concern, but it’s due to the #14 wire and not a defective unit.  I will be keeping a close eye on it, however.

The coiled cord?  Replacing that might be a project for another day.  Maybe in a year when the warranty is up anyhow, I’ll see if I can find a suitable replacement with #12 conductors.

I'm a computer guy with a new house and a love of DIY projects. I like ranting, and long drives on your lawn. I don't post everything I do, but when I do, I post it here. Maybe.
View all posts by Scott →
Tagged  automotive, DIY, garage, house, Volt.
Bookmark the permalink.