I thought I’d throw this one out there because it seems I’m not the only one observing this problem.  My Volt’s 120V charge cord and the short plug lead are running hot during charging.

You can see some other people’s input here, on this archived forum thread (I was not involved in the thread, but it came up first in a related Google search):

This is my charging setup (still waiting on the 240V Voltec Charging Station): 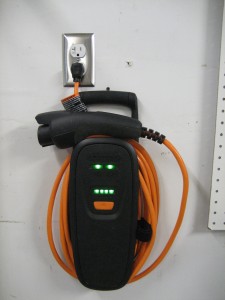 To connect to the Volt, about half the length of the charge cord has to be unwound.

I noticed yesterday that the plug (the NEMA 5-15R) was very warm.  The plug lead was warmer still.  I went on to feel the charge cord, and that was just a little warmer than ambient air where it was hanging between the charger and the floor.

However, where the charge cord was coiled around the charger, it was extremely hot.  Hot enough that I couldn’t touch it for more than a few seconds.  I pulled the plug out of the wall receptacle, and the prongs were also extremely hot.  (I wish I had a way of measuring these temperatures, but I don’t have so much as an oral thermometer around the house).

I plugged my trusty Kill-A-Watt load meter inline with the charger and let the Volt settle into its charge for a few minutes.  It was drawing a load that varied between 12.1 and 12.5 Amps.  Ambient temperature in the garage was 81F degrees at the time (according to my undoubtedly-cheap garage door opener controller).

Chevrolet, for some godforsaken reason, used 16 AWG wiring for the 120V charger.   For enclosed applications (winding the charge cord insulates it really well), the ampacity rating of 16 gauge wire is 13.

Regardless of the theoretical current-carrying capacity of any wire, one thing is universally true:  If it’s going to be installed indoors, and will be hot under load, USE A THICKER GAUGE.

It boggles my mind.  I can understand wanting to save a few bucks, but why on electrical safety?  How hot is this thing going to get this summer when it’s 100 degrees outside, and 115 degrees in my un-ventilated garage?

Needless to say, I’m keeping my charge cord uncoiled for the time being, and keeping an eye on the temperatures.

This means that for a 120V charger that will be drawing 12.5A for more than 3 hours (which of course it regularly will), the circuit needs to be rated for 15.625A (12.5A * 1.25).  That means that a circuit rated for 15A is insufficient for Volt charging according to the NEC, which is law in most areas.

(I do not have the book in front of me — please let me know in the comments if I’ve gotten this wrong).

That also doesn’t take into account any non-continuous loads.  I’d wager that most people aren’t plugging their Volt chargers into dedicated receptacles.  At my parent’s house, wired in 1976, the garage receptacle is on the same circuit as the garage lighting and the entire living room.

The safest and most code-compliant practice (IMHO) is to plug the 120V charger into a dedicated 20A circuit.

On top of that, Chevy must know that people are going to be bringing their very portable 120V charger over to other peoples’ houses to mooch some electricity.  Houses that may have some very questionable wiring.

And if I had to guess they’ll be using a nice 100 ft. 16 AWG el-cheapo extension cord from Big Lots to get to that hard-to-reach receptacle in the kids bedroom, which is “the only one that won’t trip the dang circuit”.

I'm a computer guy with a new house and a love of DIY projects. I like ranting, and long drives on your lawn. I don't post everything I do, but when I do, I post it here. Maybe.
View all posts by Scott →
Tagged  rant, stupid corporations, Volt.
Bookmark the permalink.