My wife and I recently brought home a brand new Chevy Volt (named “Sparky“), the plug-in electric hybrid vehicle (PHEV) from Chevrolet.  It’s a really cool car, and you can read about our first experiences with it here.

Of course, the whole point point behind a PHEV is the actual plugging in.  The Volt comes with a 120V charger that plugs into your average 15A receptacle, and can fully charge the car in about 10 hours.

Phase I consists of getting wiring in place that will eventually be used by the Level 2 charger, temporarily configured for Level 1 (120V) charging using a standard receptacle.

I’m fortunate to have an electrical sub-panel in my garage, so wiring the new charging station is going to be relatively easy.  The twist is that I put an electric meter in-line so that I can monitor Sparky’s energy usage.

Here’s a pictorial overview of the project: 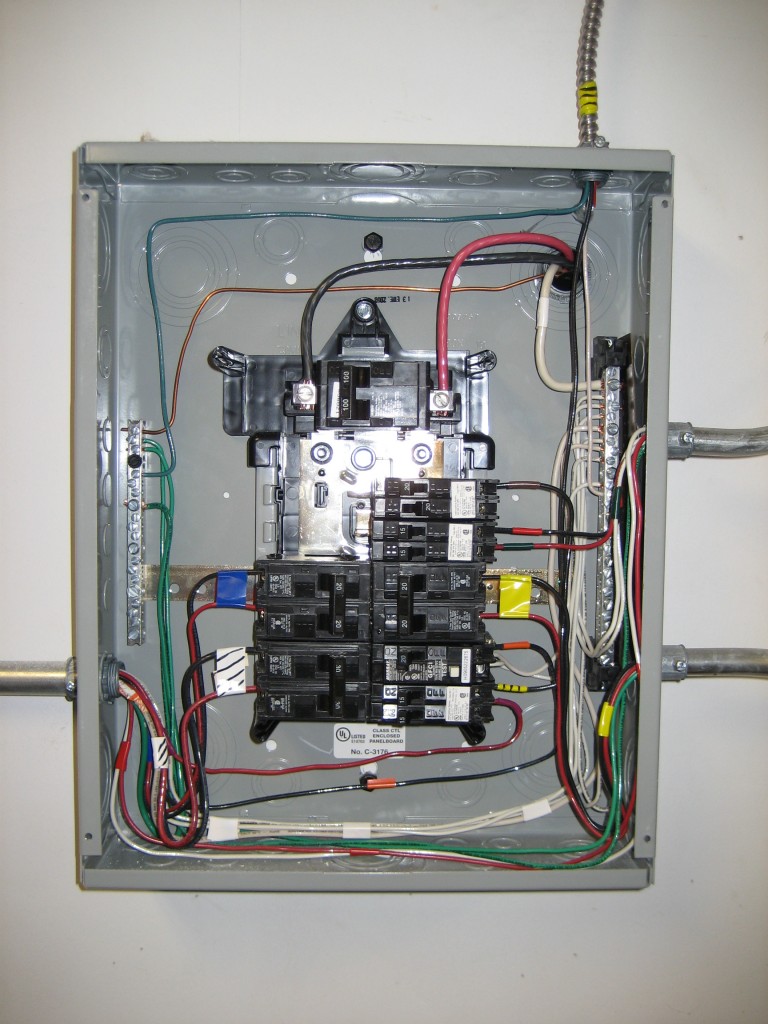 My sub-panel was almost full, and I had to move a breaker down to the bottom-right to make room for a double pole breaker.  The feeder is protected by a 50A breaker on the main panel — the 100A main breaker pictured is just used as a disconnect. 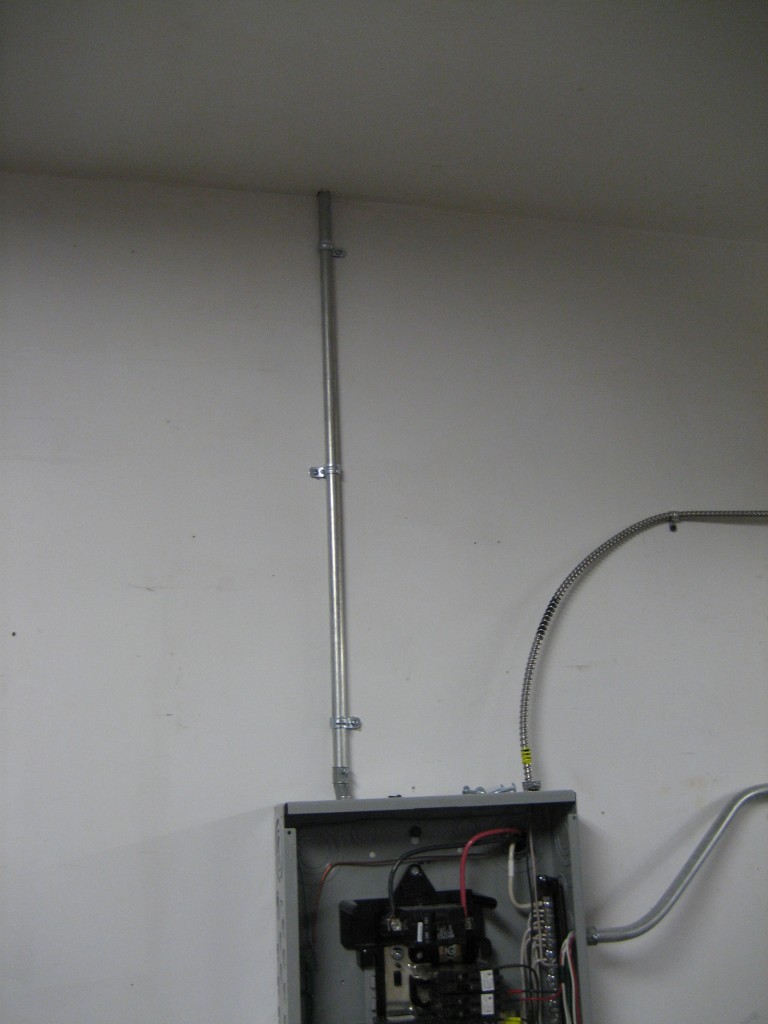 I ran some EMT from the panel up into the garage attic.  The charging station is going to be positioned on the opposite wall, and I wanted to run the wiring hidden on that side of the garage. 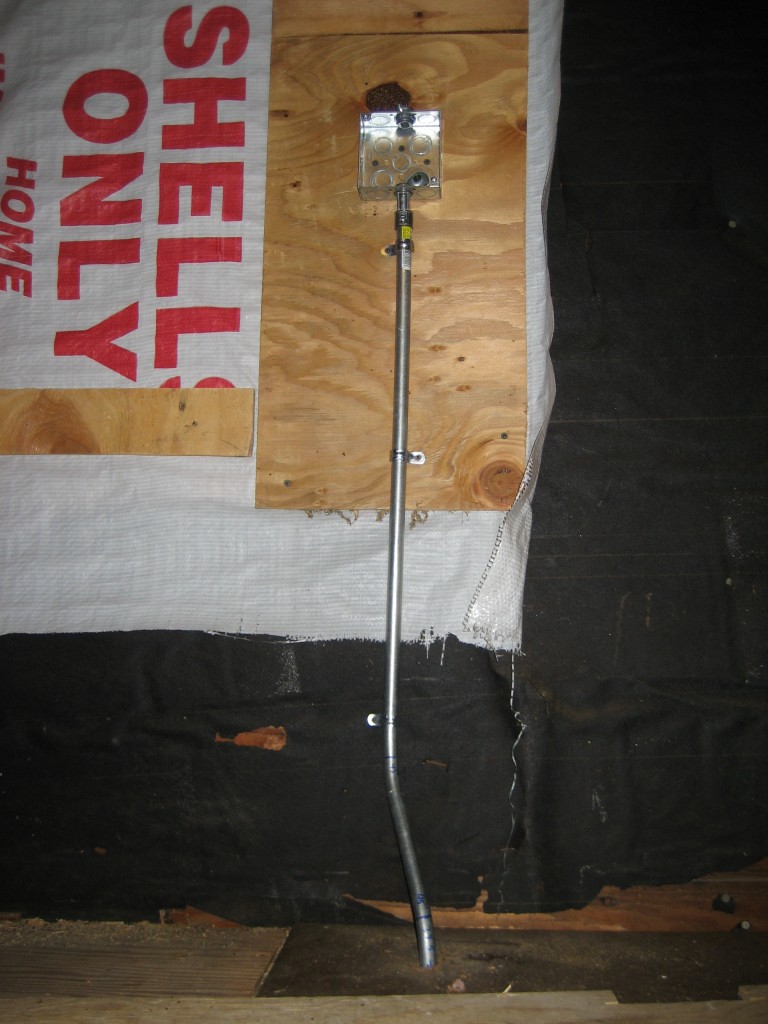 In the garage attic, the EMT terminates at a junction box so I can transition to MC for an easier run across the attic and down the garage wall.  I needed about a 5″ offset because the finished wall in the garage is proud of the wall pictured (which is actually the side of my house). 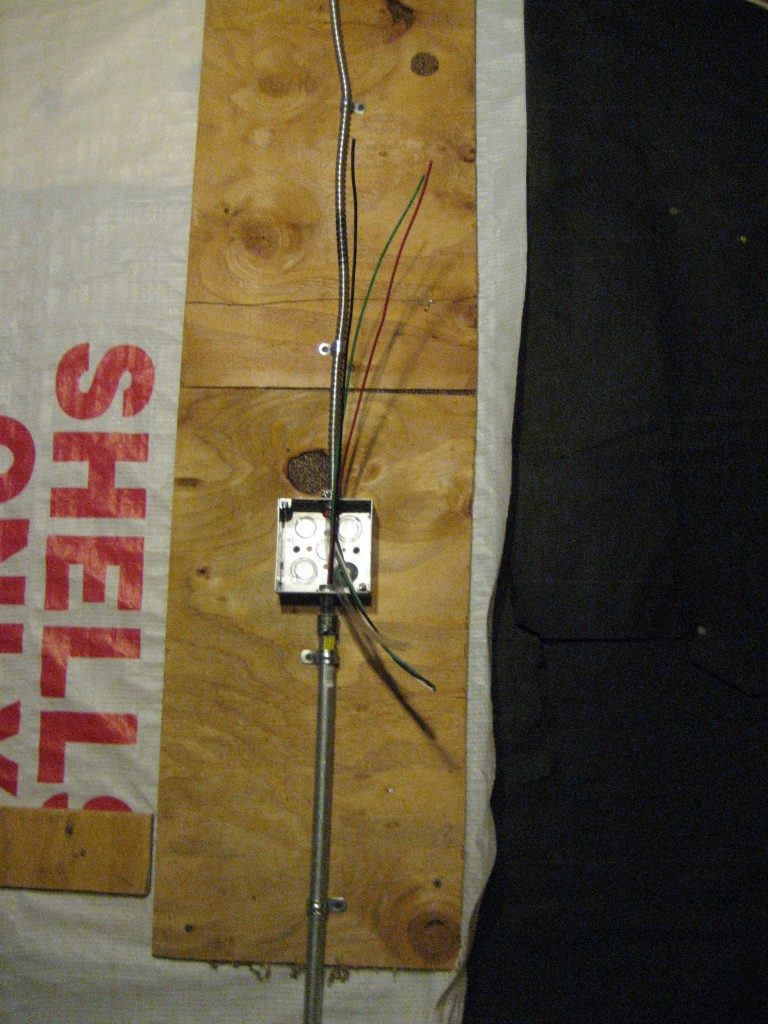 THWN waiting to be connected to the MC wiring.  All wires are #12. 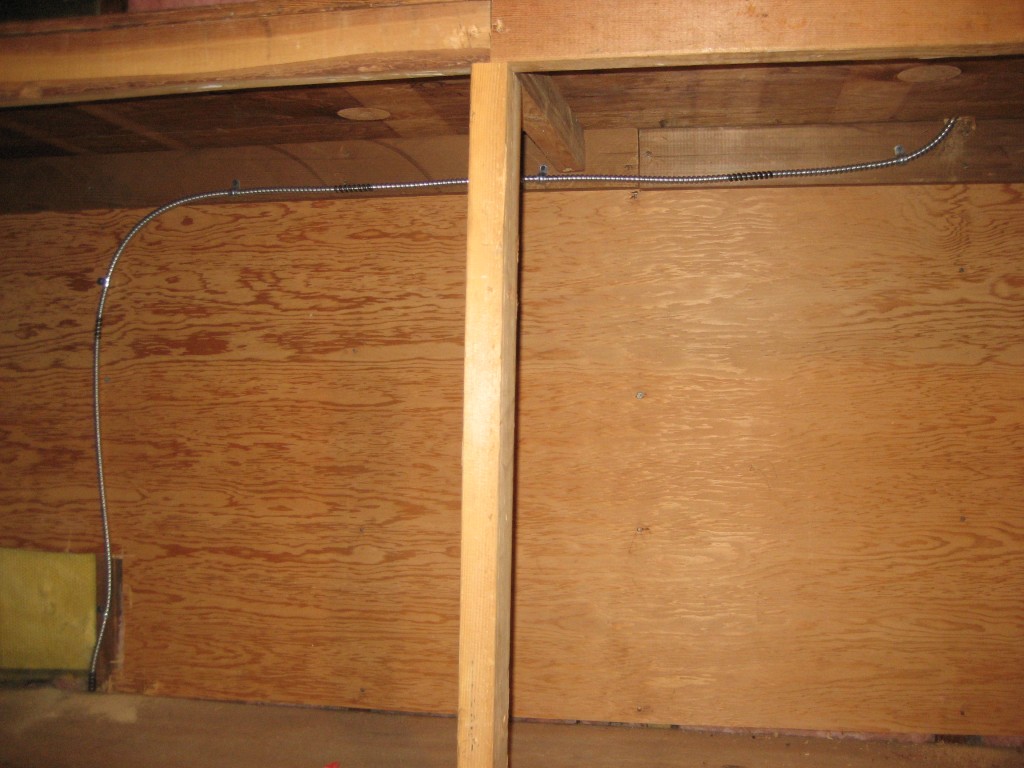 The main reason I didn’t use EMT in the attic is because there are a lot of turns in tight places.  This cable is fed from the upper-right of this picture after it passes overhead between the roof rafters.  It’s fed through the top plate of the wall below in the lower-left.  The next picture shows where it terminates. 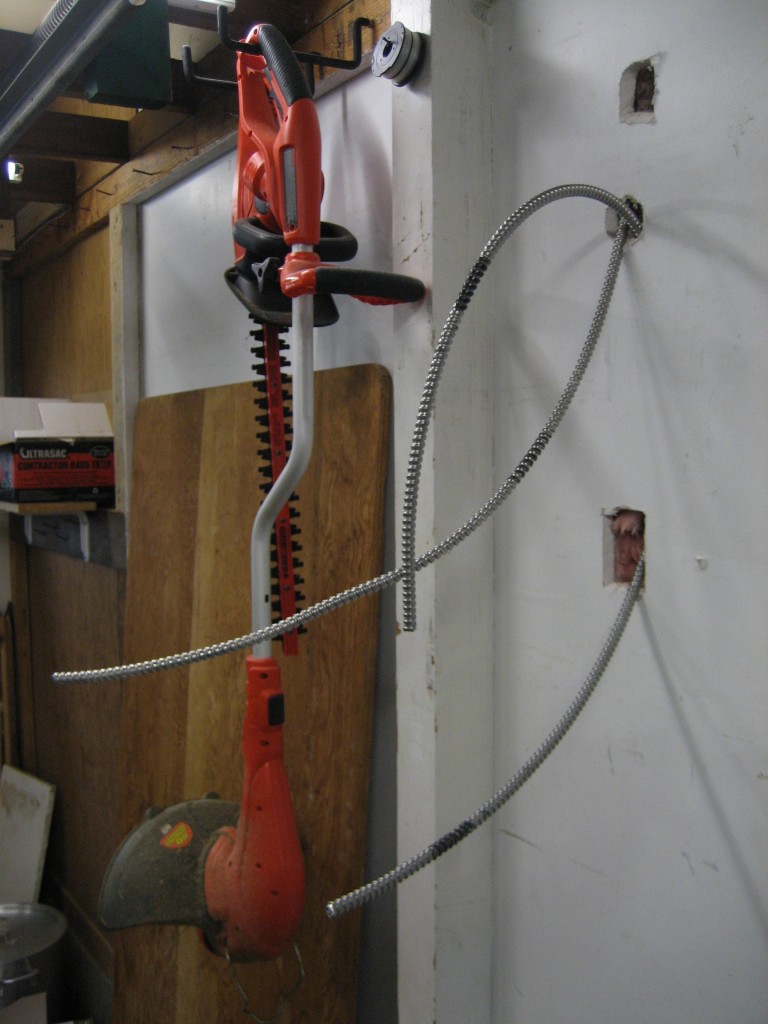 Cable from the attic, along with a jumper that will go between the meter and the charging station. 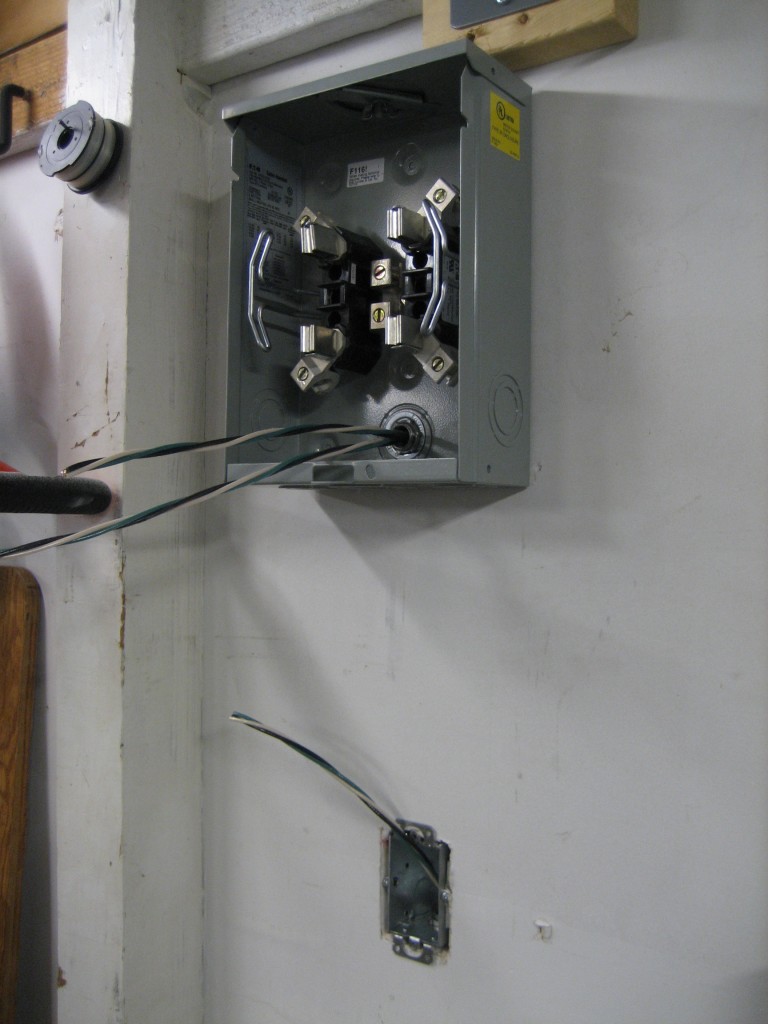 Here’s the meter pan and the box for a temporary 120V receptacle.  (More on that to come).  The wires are coming out of the bottom of the box because I left some extra slack in the wall for the eventual mounting of the Level 2 charging station (which doesn’t require a box).

VERY IMPORTANT: In the next few pictures there are things shown that you should not imitate.  They show temporary wiring that will only be serviced by me, and it will be gone within the week. 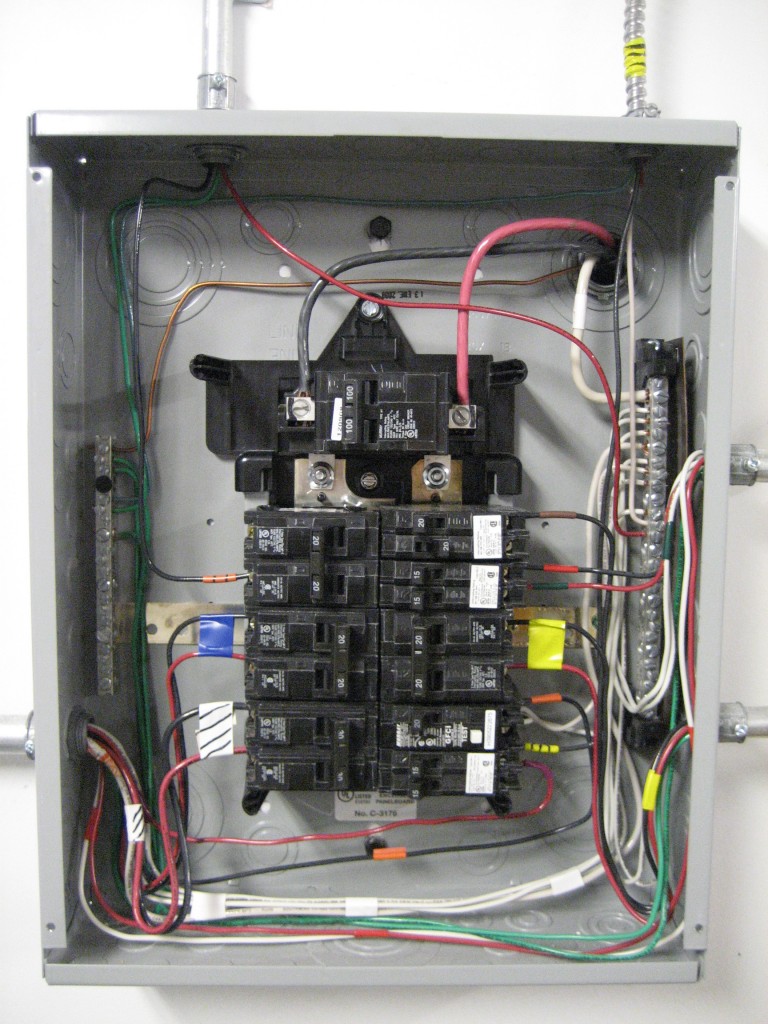 New circuit wired to a new double-pole breaker.  Note that I have used a red wire as a neutral.  That is an incorrect practice according to the NEC, and general logic.  In about a week, this circuit will be converted to 240V by moving the red wire to the other pole of the breaker in the upper-left. 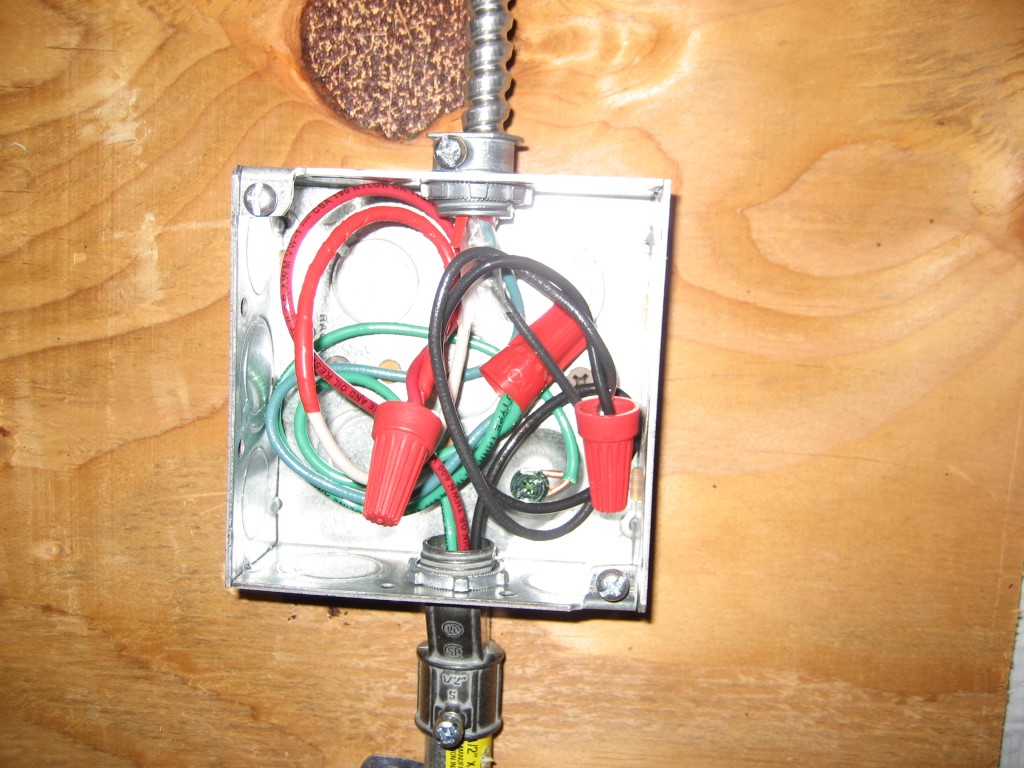 This is the junction box in the garage attic.  I’ve re-labeled the white conductor in the MC red, which is incorrect when it’s used as a grounded conductor (neutral).  It is acceptable practice for the future use as a 240V circuit. 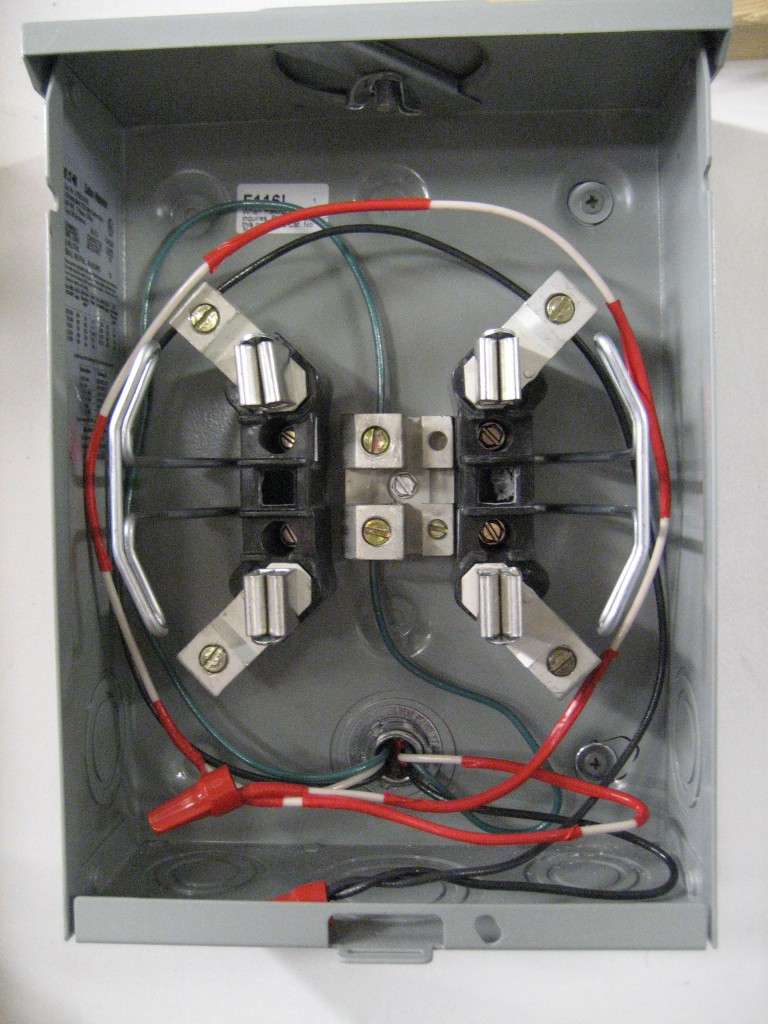 The meter I purchased requires a 240V circuit, so for now the meter socket connections are bypassed, and there is plenty of extra slack left on the wires.  Again, what’s pictured is not the correct practice for wiring a 120V circuit, as the white neutral wire has been re-labeled red, indicating it is “hot”.  Also, without the meter in place this box can’t be adequately covered, which is also incorrect.  The neutral terminals have here been used both to connect the two grounding wires, and to bond the box to the grounding wire from the panel.  I believe this is acceptable practice, and though the terminals look large, the plate on the meter pan does permit a minimum of #14 wire under those terminals. 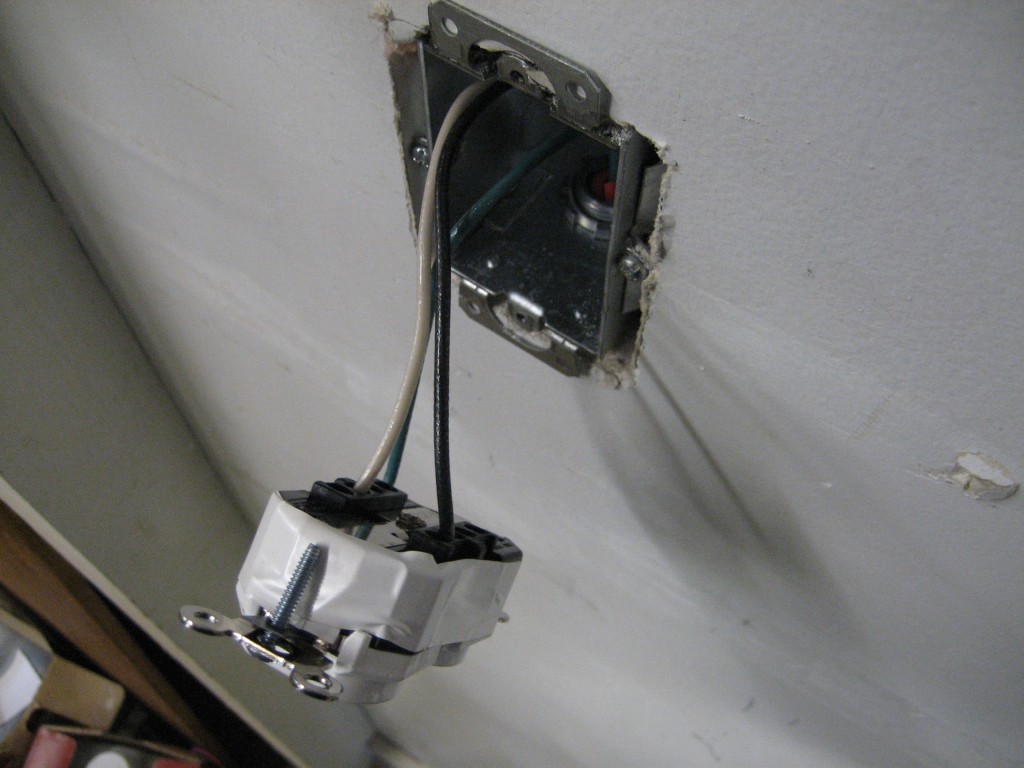 The receptacle unit is wired and ready to go into the box.  Note that this is not a “back stab” connection.  The wires are attached by compression terminals.  It’s also a duplex receptacle, which should not be used on a dedicated circuit, but again, this is temporary. 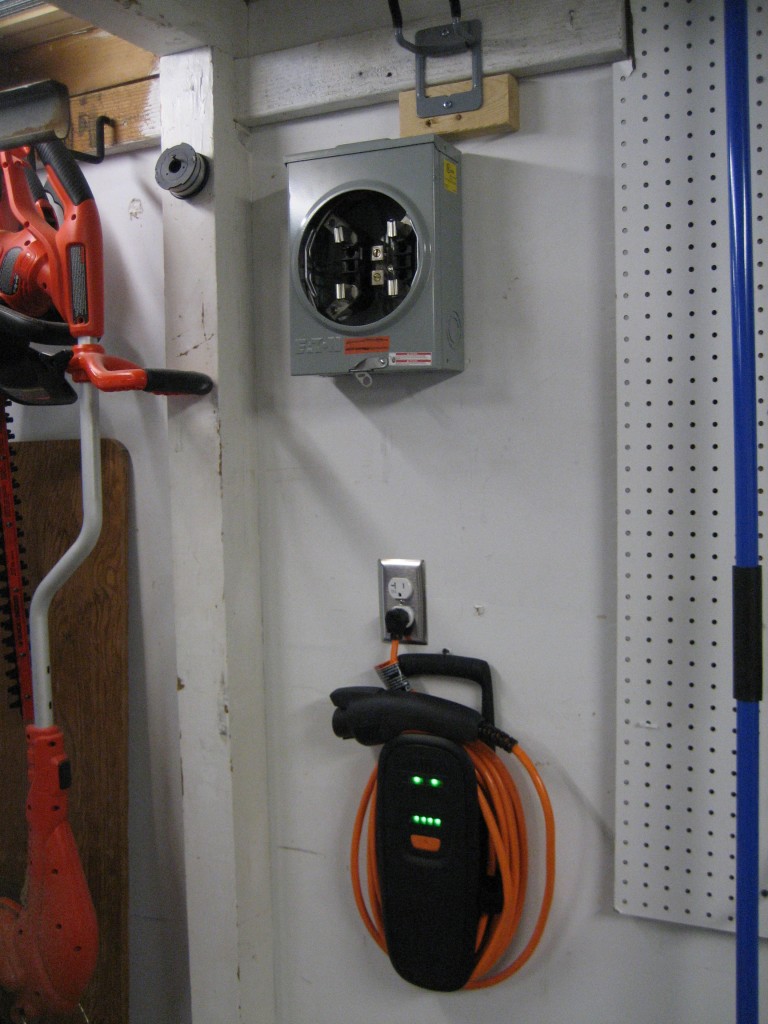 The meter socket and Level 1 charger.  I forgot the exact meaning of the lights on the charger, but I do know that the top two lights would indicate a wiring fault if they were anything but both green.  So it appears I have success!  One last note on safety:  The meter socket looks incredibly dangerous in this picture, as the contacts are, shall we say, overly accessible.  I just want to point out again that those contacts are not connected to the circuit.  This box is still unsafe because it’s improperly covered without the meter in place, but there are no exposed live conductors.  Again, this is very temporary. 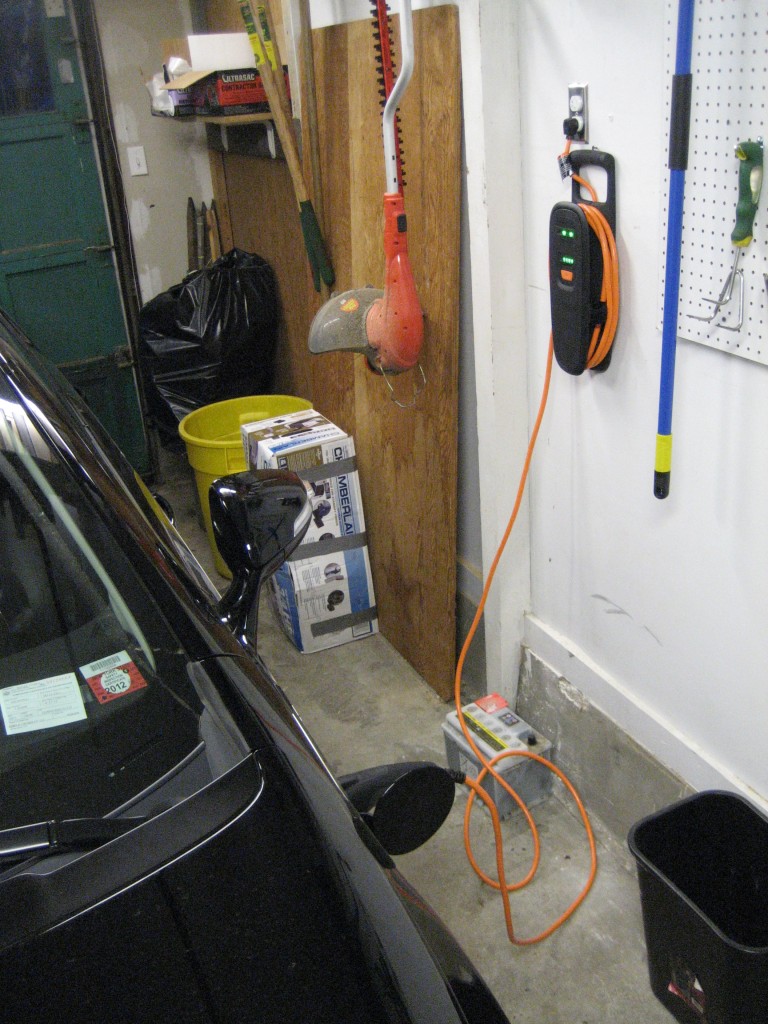 Here’s Sparky, enjoying her first meal in the garage.

Stay tuned for Phase II of the project, when all will be made right with the electrical wiring, and our new 240V Level 2 charging station will be installed!

I'm a computer guy with a new house and a love of DIY projects. I like ranting, and long drives on your lawn. I don't post everything I do, but when I do, I post it here. Maybe.
View all posts by Scott →
Tagged  automotive, DIY, electrical, garage, house, Volt.
Bookmark the permalink.