With the purchase of Amanda’s new Volt, I had to get the garage ready for a permanent resident.  She had kept her old Saab in the driveway, so I pretty much had the run of the place until now.  Protection from the elements aside, the garage is just a logical place to stick an electric car whilst it’s charging.

And my father raised me on automatic garage door openers, so I figured installing one would be the right thing to do.

Here’s a before picture of the garage: 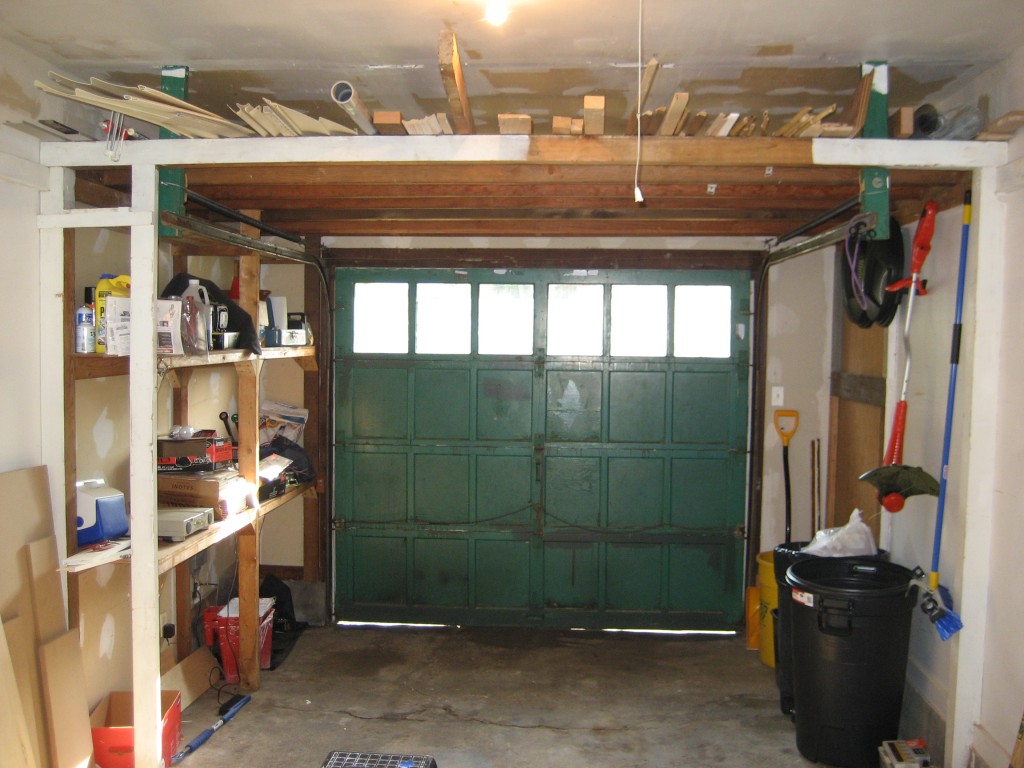 Nothing to laugh at, I suppose.  But the stupid door would just sit there unless you went up to it and moved it around manually.  Clearly an unacceptable situation.

But wait.  Did you see the problem in that picture?  I sure didn’t.  Not even after looking at the situation real closely, like in this picture:

As anyone would, I went to my local Home Depot, and purchased their top-of-the-line Chamberlain Whisper-Drive Whateverthehell for $250.  Like an ass, it was after I got home that I started to check clearances around the door.

Do you see that 2×4 running horizontally above the door?  In the picture, you can see that it’s shaved down on one corner.  The joist across from it is likewise shaved down, only on the corner facing the door, so you can’t see it.

Why were they shaved down?  Because that’s the only way the motherfreaking door will actually clear them.  The top of the door travels up in between those joists as it rises, by about 3 inches.

Meaning I couldn’t mount the damn guide track for the opener underneath those beams.

Fortunately after some head scratching — “Should I lower the track and get a low-clearance kit?  Get rid of the overhead storage completely?  Return the opener and let Amanda open her own damn door?” — I came up with a solution: 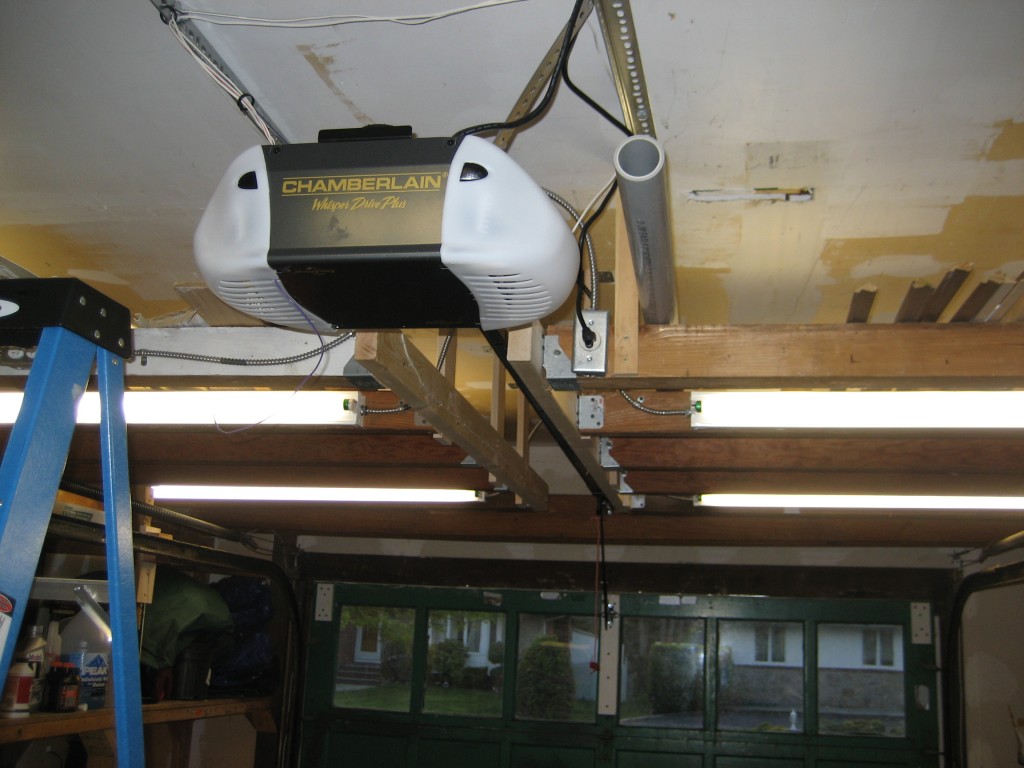 Use a Sawzall (yes, I have an actual Milwaukee) to cut the ever-living crap out of those joists. It took some temporary bracing and a bit of cursing, but I managed to get a nice channel cut out for the opener, without losing my all-important storage area.

The middle of it is hung from the ceiling, which you can see a bit better here:

The structure is hung by 1×4 maple (yes, I decided to go fancy) which is bolted to 90deg angle brackets, which are then lagged into the ceiling joists.  It’s pretty damn solid, fortunately.

Here’s one more picture from the door’s end of things, just for fun: 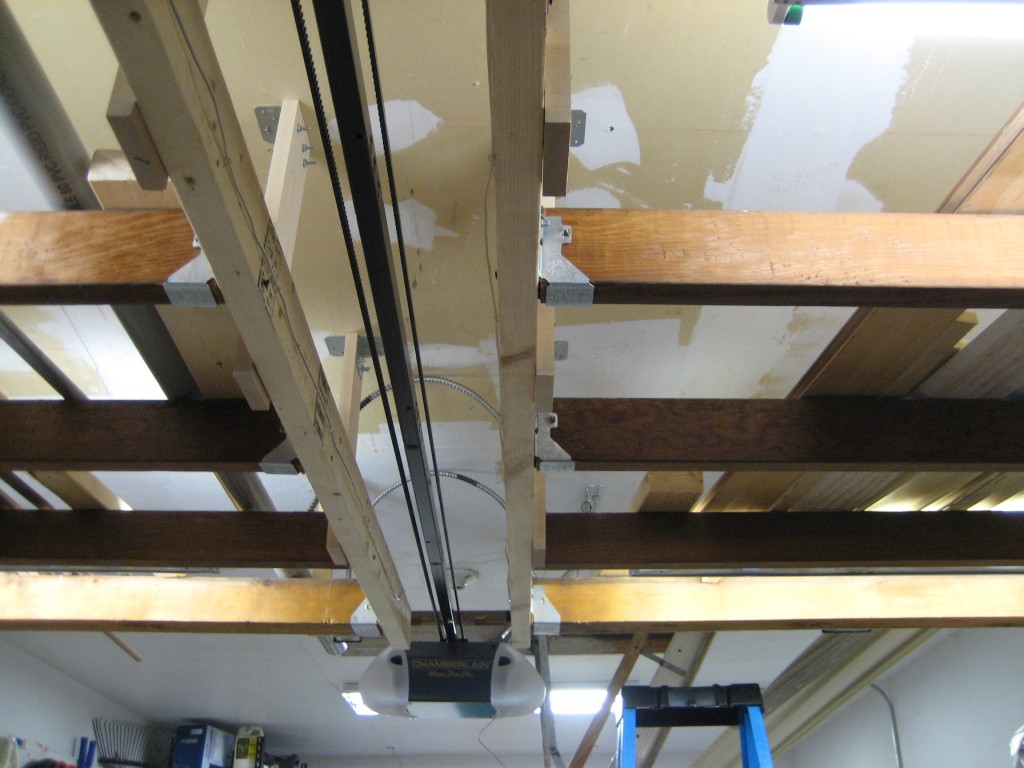 Between figuring out a plan, removing (and later re-wiring) the lights, restructuring the overhead storage, installing and configuring the opener, getting power to the opener, and about 4 trips to Home Depot, what should have been a simple project ballooned into a 9-day adventure of anger and confusion.  (OK, so 2 weekends and some evenings in between, and I was calm for most of it).

Fortunately the whole thing works just fine, and I managed to avoid any major blunders along the way (except assuming that this would be a simple project from the get-go, of course).

Oh, and the garage door is probably 50 years old and will fall apart under the stress of constant use, so I’ll probably be replacing that soon.  (Hooray?)

Sorry if you were expecting a how-to, but I hope this gave you some ideas if you’re stuck in a similar situation.  (Plus, I just didn’t think to take pictures during the project).

I'm a computer guy with a new house and a love of DIY projects. I like ranting, and long drives on your lawn. I don't post everything I do, but when I do, I post it here. Maybe.
View all posts by Scott →
Tagged  angry rant, garage, house, kludge, rant.
Bookmark the permalink.