We have a new baby in the house, and not the pooping/barfing kind of baby.

It’s a brand-spankin’-new Chevrolet Volt, purchased from Arnold Chevrolet in West Babylon, NY.  They had the last black Volt in all of Long Island. 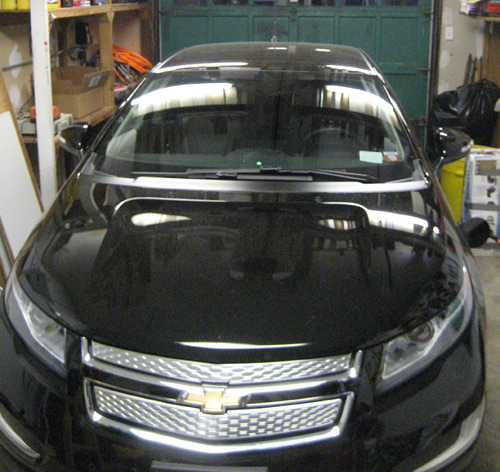 Sparky. This is the only picture I have right now, and doesn't really do her justice.

I didn’t really have any pre-conceived notions about Chevys, and have never owned one.  But we did have a 2005 Acura TL for a few years, and that’s the closest vehicle to which I can compare the Volt in overall build quality, fit, finish and features.  The Volt is comparable in price to a TL (discounting the $7,500 tax credit), and in my opinion is in the same class.  Hell, the front end of the Volt even looks similar to the last production TL design.  The rear end looks quite sexy, especially in black because the small rear glass panel blends in seamlessly.

Amanda had been driving a 2003 Saab 9-3 SE convertible, and for all its foibles (that’s a post for another day), that thing was fast.  I mean really fast.  Only the Volvo S60 came close to the Saab’s pick-up.  The Volt is difficult to compare, due to its smooth electric drive.  However…

In “sport” mode, the Volt will push you back in your seat. That was a big concern for us when we were considering an electric car.  It’s really not tree-huggingly-sluggish as you might think.  I doubt it could keep up with the ol’ Saab, but in my opinion it blew the Acuras, CC, and Maxima out of the water.

The Volt’s “infotainment” (I hate that “word”) center is pretty well put together.  The interface could use some polish, but for a first-generation product it’s quite nice.  It does just about anything you’d want it to do (Bluetooth phone connection, HDD and USB MP3 playback, CD, XM, AM/FM, traffic, nav, climate control, power monitoring, and then some).  The console is laid out far differently than what we’ve seen in any other car, but it definitely has a more futuristic and, more importantly, integrated look than most.  (For example, in the CC and the Volvo it looks like they stuck an off-the-shelf radio into the dash and made the “dusting off the hands” motion).

Another one of our concerns was the transition from battery power to gas-generated power.  We didn’t get a chance to test drive a Volt with a depleted battery, and my supposition was that the car would lose a lot of it’s “oomph” on the gas engine alone.

We were quite pleasantly surprised with the performance on gas. There’s a slightly noticeable difference in acceleration, but nothing earth shattering.  It’s not like going from a V6 to a V4.  More like just losing a few horsepower.  (Very scientific, I know.  But that’s the best I can do with the measuring tools at hand:  My butt in a seat).

Though as I gather from an official Chevy video about the Voltec propulsion system, when the car switches over to the gas engine, it still accesses a “buffer zone” in the battery for rapid acceleration using battery + generator power.  I have no idea what happens to performance when that buffer zone is depleted.

In total it has racked up:

That works out to approximately 40.7 MPG when solely on the gas engine.  A very impressive real-world number.  I can’t say exactly how that hashes out as far as highway vs. city driving, but Amanda does a decent amount of both.

Oh, the coolest part?  I got the above numbers on my phone, using the OnStar app for Android.  While Sparky is parked about 15 miles away.

Fortunately, Amanda’s round-trip work commute is about 29 miles, which comes in under Sparky’s battery capability of 35-42 miles (the number varies from day-to-day).

Detailed figures on this are coming soon.  I just finished “Phase I” of our garage charging project, which consisted of wiring up a dedicated 120V receptacle for the standard charger.  The wiring goes through, but doesn’t connect to, an electric meter (just like you have on the side of your house).  “Phase II” is going to consist of installing a 240V charging station, which will be monitored by the electric meter.  That will get me some good, solid figures on cost-per-electric-mile.

Though I don’t have any real figures, based upon numbers from my local power company (LIPA), we estimate that charging our Volt will cost approximately $2/day. If this is even near true, that’s great:  Amanda was previously spending an average of $5.83/day on gas for the Saab (based upon spending tracked on Mint.com).  She’s also averaged ~$0.68/day worth of gas for the Volt to date, but that still leaves us under the 50% mark for operating cost.

At those numbers, Sparky should save us (and this is a very rough estimate right now) $1,150/year. 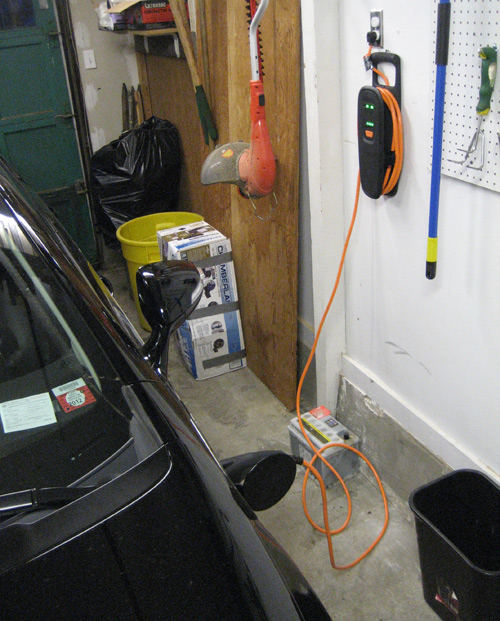 Sparky charging in her new home

More to come on Sparky in future posts!

Update (2011-06-08): I have some revised MPG numbers and some further discussion on the topic in a new post:

I'm a computer guy with a new house and a love of DIY projects. I like ranting, and long drives on your lawn. I don't post everything I do, but when I do, I post it here. Maybe.
View all posts by Scott →
Tagged  automotive, Volt.
Bookmark the permalink.